The INF treaty was far from perfect. But instead of abandoning the deal altogether, Russia and the US should have modernized the agreement. Yet it seems neither side was willing to do so, says DW's Bernd Riegert. 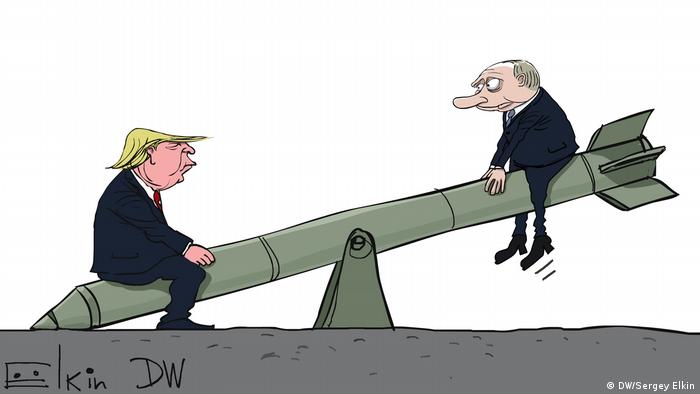 As of Friday, the treaty banning the US and Russia from developing and deploying land-based intermediate-range ballistic and cruise missiles armed with nuclear warheads is history. This represents a huge blow to Europe's security architecture — after all, the treaty was agreed 32 years ago to keep this very continent safe.

After a previous arms race, the US and the Soviet Union had agreed to scrap an entire class of weapons. Both superpowers abolished an unnecessary and highly expensive threat, which, of course, benefited their respective European allies as well. This major step made a war on European soil much less likely.

The concept of nuclear deterrence — the one who shoots first, dies second — nevertheless persists to this day. But the number of nuclear weapons owned by both superpowers has dropped considerably. While the US and Soviet Union each possessed about 12,000 nuclear warheads in the late 1980s, today the US and Russia each have approximately 1,600.

Bernd Riegert is a correspondent in DW's Brussels bureau

The demise of the INF treaty illustrates just how much the US and NATO on the one side, and Russia on the other, have come to distrust each other.

Since 2008, Russia has taken an increasingly assertive foreign policy stance. Moscow's 2008 war in Georgia, the 2014 annexation of the Crimean Peninsula and ongoing role in the eastern Ukraine conflict, support for the Assad regime in Syria and provocations along NATO's eastern frontier are perceived as dangerous developments by the West.

The development of new cruise missiles by Russia, observed at the latest in 2014 (and thus many years before Donald Trump became US president), ultimately justifies the US withdrawal from the INF treaty.

What's more, the treaty was no longer suited to the new geostrategic status quo. It didn't apply to China, which has set up land-based intermediate-range missile systems of its own. And it didn't cover the new missile defense systems deployed in NATO states, which, although established to counter threats from Iran and North Korea, were vigorously opposed by Moscow.

But Russia and NATO/the US should not have scrapped the treaty in its entirety. Instead, they should have brought new signatories like China on board and modernized the agreement. The treaty could even have been expanded to cover internet weapons and killer robots. But Russia let this opportunity slip, and the US was only lukewarm about this possibility.

A new arms race will now, of course, follow in consequence. And the US has already announced it will test new cruise missiles. NATO Secretary-General Jens Stoltenberg pointed out on Friday that the West also had to build up its weaponry still further in the 1980s before the economically inferior Soviet Union agreed to the INF treaty.

It's to be hoped that both major nuclear powers will at least salvage the Strategic Arms Reduction Treaty (New START), which aims to limit the number of nuclear weapons kept by both sides. Fresh talks on New START should also, as a matter of urgency, include the world's other nuclear powers such as Pakistan, India, Israel, North Korea and Iran.

But whether this will actually happen is questionable, given the tense atmosphere and intense distrust between the US and Russian leadership today. There is a great need for arms control. But it's hard to see how to get there.

The INF treaty could only be signed in 1987 after Mikhail Gorbachev took charge of the Soviet Union, replacing its previous hard-line leadership. One can only hope that we will not have to wait until the next generation of political leaders takes over in the Kremlin to see a new arms reduction treaty.

But there are very justifiable doubts about whether the current US administration itself is capable of sensible negotiations on disarmament. An unpredictable president who tends to tread heedlessly on toes in foreign policy issues and who surrounds himself with hawks does not really inspire confidence in this regard.