Trump played down the risks of COVID-19 and often refused to wear a mask. Now, he has contracted the virus, and this fact will surely have an impact on the upcoming election's outcome, says DW's Ines Pohl. 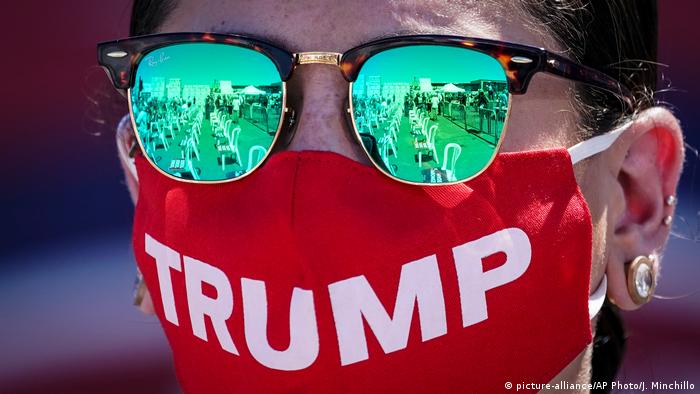 Oh, the irony. After months of playing down the risks of the novel coronavirus, calling it a "hoax" and an invention of the Democrats and making fun of people who tried to protect themselves and others by wearing a mask, US President Donald Trump has contracted the potentially deadly virus himself.

Nobody can yet say what impact the virus will have on Trump, who is 74 and overweight, but it is certain this development will have a disastrous effect on his election campaign.

The president will no longer be able to deflect attention from his own failures, from the fact that he failed to put a national plan in place to combat the spread of the disease and did not offer federal support to state governors who were left in the lurch. Nothing can hide the fact that over 200,000 people in the United States have already died of COVID-19.

Reality has ripped apart the president's web of lies. The Trump administration will no longer be able to create smokescreens to deflect from its own mistakes, such as presenting the riots in certain US cities as being more dangerous than COVID-19, which is killing 1,000 people a day in the US.

In the run-up to the election, Trump has done everything in his power to try to keep the US economy on track while not paying heed to the loss of life caused by the disease. But his infection will put paid to this strategy. Not even the most diehard conspiracy theorists and nay-sayers will be able to continue denying that the coronavirus is highly contagious if arguably the most well-protected man in the world contracted it.

The US could not be further away from the normality the president had hoped would return soon.

When Trump tweeted that he was positive, social media platforms were flooded with comments of all kinds. Some observers suggested that he invented his diagnosis to distract from the drops in his approval ratings. Others simply laughed.

Trump can deal with comments like that — as the president of "fake news," he is used to it. But how will he be able to cope with the blow to his self-esteem?

What can a sick Trump offer?

After the first presidential debate this week, a key argument put forward by Trump's supporters was that he appeared to be in better physical shape than his Democratic Party rival Joe Biden and that he was thus better suited to fill the demanding position.

If Biden does not test positive himself, this argument will fall flat in the coming weeks. Perhaps Biden will no longer be derided for his age but respected for his wisdom.

If Trump does not have any energy, he does not have much to offer. He certainly doesn't have the right recipe for dealing with this deadly virus.

And still, we wish Donald Trump and his wife, Melania, all the best for the coming days.