Investors, already skittish ahead of US elections in November, now have another thing to worry about: the president's health. After Donald Trump tested positive for COVID-19, analysts expect more market volatility. 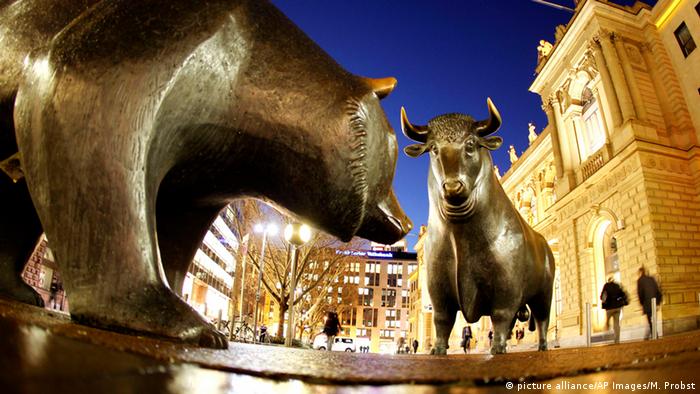 Donald Trump's positive test for the coronavirus triggered a sharp sell-off in stocks and oil Friday morning, while demand for traditional safe haven assets such as gold and bonds rose. But at the end of the trading day in Europe, the continent's leading stock exchanges were down just 0.5%, having clawed back some of their starker morning losses.

In the United States, stocks also pared losses as investors weighed the implications of Trump's illness with renewed efforts in Washington to reach a compromise on fiscal stimulus.

After dropping as much as 1.2%, the S&P 500 Index cut its decline almost in half following comments from Speaker of the House Nancy Pelosi that she would work to find a compromise with Republicans on a coronavirus recovery bill.

The wild swings in global equities came after the US president said in a late-night tweet that he and his wife had been tested positive for the coronavirus, shortly after one of his closest aides, Hope Hicks, had fallen ill.

Trump's announcement came at a critical time with only one month left to the US presidential election and has prompted investors to prepare for a period of increased volatility.

Chris Weston, head of research at Pepperstone in Melbourne, told Reuters news agency that the US president had caught a disease that "kills people" which is why investors are "derisking."

However, the stock market sell-off on Friday wasn't nearly as broad as seen during the depths of the market turmoil in March, when the coronavirus began its global spread. This is causing analysts to be cautious in their predictions about where the markets will go from here.

Quincy Krosby, chief market strategist at Prudential Financial in New York, told Reuters that the initial "knee-jerk reaction" from the market  was "dramatic," but added: "The more information the market receives, especially if the president is recovering and where the symptoms have been mild, it should ease pressure."

Most analysts polled by Reuters, however, shared the view of Paul Donovan from UBS Global Wealth Management, who said that Donald Trump's infection might be "worrying on a personal level," but the focus of investors would be largely on the outcome of the upcoming election.

"As long as we're uncertain about who will win the election, it is difficult for markets to truly settle," said Ayako Sera, market strategist at Sumitomo Mitsui Trust Bank in Tokyo.

And David Arnaud, a fixed income fund manager at Canada Life Asset Management, said that what was getting him "worried more than anything else is the question mark over the legitimacy of the election process," referring to Trump's recent statement that he might not accept the election outcome if he loses.

Patrice Gautry, chief economist at UBP in Geneva, believes that if Trump is positive but not seriously ill, markets could rebound.

"US institutions are solid, and Vice President Pence should lead campaign and affairs if needed. Trump may continue to manage from the White House, so, economically, the damages are limited as long as he is just positive but not really ill," he told the Bloomberg news agency.

Roger Jones at London & Capital also can't see Trump's positive test to be "a lasting issue for markets past the initial shock," which is now subsiding.

"The only way this could develop into an issue is if the election has to be postponed, then there might be a big public reaction," he told Bloomberg, adding that this "seems improbable" with more than a month to go to election day.

Financial markets could be indirectly affected, however, if Trump's illness will further hold up crucial rescue packages for the virus-hit US economy. Russ Mould, investment director at AJ Bell, thinks the positive test could "decrease the chances of a stimulus package passing through Congress" in the immediate future.

"Since markets are hoping for more stimulus, fiscal or monetary, its absence will be a concern, given the still-fragile nature of the recovery, he told Bloomberg.

Jun Kato, chief market analyst at Shinkin Asset Management, adds that this, in turn, could put pressure on the US currency. "This will further lead to dollar weakness as it comes on top of the likely prospect that the US stimulus package won't get approval until after the election." As a result, Kato expects more pressure on the US central bank to "deliver a more dovish tone that would cap US yields and weigh on the dollar."