Paris Saint-Germain's aggregate win over Bayern Munich was football of the highest quality. But it was also more proof that proposed plans to overhaul the Champions League would be detrimental, DW's Matt Pearson writes. 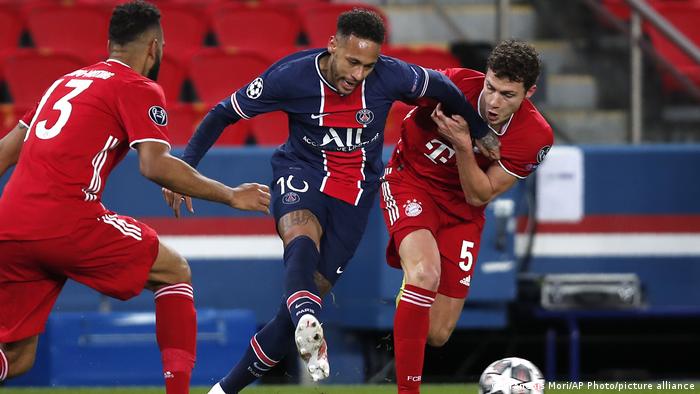 No fans, a relentless treadmill of games, sportswashing and COVID-19: It has been difficult not to become a little jaded by the context in which elite-level  football is being played at the moment.

But the breathtaking quality and intensity of Bayern Munich's 1-0 win (and aggregate loss) to Paris Saint-Germain on Tuesday made it possible to remember why, when you strip away the oil money, gambling sponsors, commercial partners and naked greed, football is such a compelling sport.

In addition to the quality, it was the jeopardy and scarcity of the contest that made it so gripping. The current champions of Germany and France had met just 10 times before (although the last meeting was both recent and significant) and the tie was on a knife edge from the moment Kylian Mbappe gave PSG the lead in Munich last week.

But the qualities of jeopardy and scarcity are under attack from the greedy, protectionist overtures of the European Club Association's plans, likely to be backed by UEFA, for a new Champions League format.

The so-called Swiss system backed by the European Club Association would mean nearly twice as many games and no significant breaks between rounds of matches. It would also provide an extra safety net for traditional European powers to qualify even if they have poor domestic seasons. Failure will barely be conceivable for those with deep enough pockets.

In essence, UEFA looks likely to bow to the richest clubs in order to stop the formation of a breakaway league that has been mooted for decades by essentially creating another one — at a significant cost to the rest of the member clubs. The shop will be shuttered.

There were points in Tuesday's game when that didn't seem to matter, when the combination play between Neymar and Kylian Mbappe, or the midfield probings of Joshua Kimmich and David Alaba were enough on their own. But, in reality, the context in which those players were excelling matters. If this had been in some preseason tournament played in a neutral country thousands of miles away, few would have cared. And rightly so.

Though the ECA's plan seems to be driven by self-interest, greed and a desire to protect the clubs should be best equipped to protect themselves, one could argue that at least they will lead to more games between the best teams.

But most of those are likely to be stripped of meaning. Bayern, PSG, Manchester City, Real Madrid and the rest are likely to have more than enough to swipe away any teams from less wealthy leagues, before playing a few games of significance at the end.

Even when so much of it is missing from football at the moment, context matters. To mitigate the threat of failure is to mitigate one of the sport's central pillars. And we've lost enough of them already.

Hansi Flick heading for the exit?

In a weekend low on goals but high on significance, Leon Goretzka's strike took Bayern Munich a big step closer to nine in a row. But things are grim for Borussia Dortmund, who could soon see a player exodus.