Opinion: Migration background is not a blemish | Germany| News and in-depth reporting from Berlin and beyond | DW | 12.10.2013

Opinion: Migration background is not a blemish

The German public tends to harbor an image of immigrants as people lacking in education and as drains on the social welfare system. That's the wrong impression, says DW's Robert Schwartz. 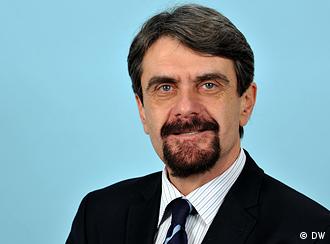 Once again, migrants are the focus of attention in Germany. This time around, it's not about the perennial issues of poverty-related migration and crime committed by immigrants. Instead, the target is the education system.

The facts: Compared to other countries, Germany's adults scored somewhere in the middle in a recent Program for International Student Assessment (PISA) study. Almost anywhere you look in the mainstream media, the blame for that fact is said to lie on a lack of education among weaker segments of society. And on the migrants. In general - just like that.

Let's summarize this message: Migrants contribute significantly to the stultification of our society; migrants plunder our social systems; migrants are criminals. What does the everyday German think? Sending foreigners back to their home countries would be an obvious consideration.

Let's take a look at Germany's recent history. With the help of the Marshall Plan, West Germany was systematically rebuilt after World War II. And after reunification in 1990, solidarity surcharges were also introduced to redevelop the former East Germany - a scheme which has still not been abolished a quarter of century later.

After suffering under two dictatorships, the German people and society were actively given a chance to find a way out of their social and economic plight, a unique opportunity never before seen in the world. And because the citizens - in both West and East Germany - were given this chance, Germany became wealthy - and "sexy." And a destination for migrants.

Nevertheless, even in wealthy Germany there are many people living at the edge of society - immigrants and non-immigrants. And, whether migrant or not, education is closely linked with this precarious situation. But to keep making the blanket statement that all migrants are uneducated and ignorant is simply…ignorant.

To give an example: when children in Germany begin school, they are asked about their migration background. The answer is meticulously recorded and filed. When parents ask why, the response is succint: 'For statistical purposes!' The child's potential aptitudes are not the focus here, no, just the child's migration background. I know of many such cases. Meanwhile, these children are amongst the best in their class and have even skipped a grade. But, does this appear in the statistics?

Ultimately, public opinion needs to change. No, I'm not asking to sugarcoat the often terrible conditions in which immigrants sometimes live in Germany. But I would be very happy if my neighbor would listen more often to some of the success stories which - what a surprise - sometimes even include migrants. Maybe it would change his world view. And maybe he would not always look to place the "blame" on these "immigrants," but maybe on himself instead.

In times of globalization, the land of poets and thinkers needs to reconsider. Migrants enrich society and its social systems, and contribute to the general wealth. On the other hand, society's disadvantaged - whether immigrant or not - must be helped. Here, clear political decisions are needed.

It's time to make 'migration background' a positive term, and not just do the politically correct thing and select it as the non-word of the year. But let's be honest: is our background still relevant in the modern and cosmopolitan society in which we live? Yes, for one's own identity, certainly. But beyond that? For school or work purposes? Definitely not!