The German parliament is urging Turkey to remember the genocide of the Armenian people 100 years ago. A good move, says Christoph Strack, because coming to terms with past divisions can clear the way for a common future. 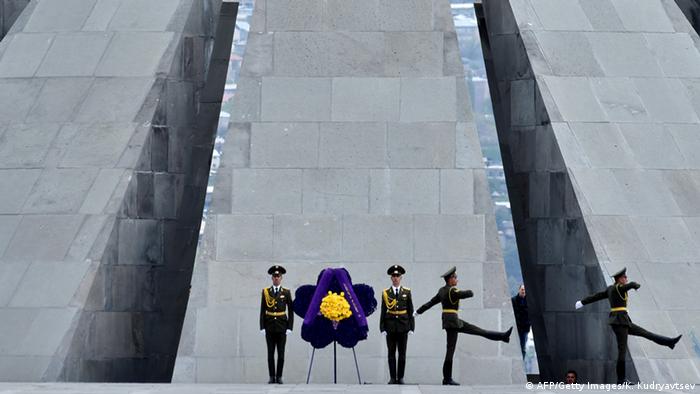 As a Jewish proverb goes: "To forget is to prolong exile; the secret of redemption is memory." German President Richard von Weizsäcker quoted this proverb in his unforgettable speech on May 8, 1985, in the German parliament in Bonn marking 40 years since the end of World War II.

You have to face up to your past. That's true both for individuals as well as nations. One of the most recent examples of this: German Chancellor Angela Merkel and French President Francois Hollande side by side, marking the centennial anniversary of the Battle of Verdun.

We can justifiably apply these words, this call for heartfelt remembrance, to the ordeal of as many as 1.5 million Armenians who were murdered 100 years ago by Ottoman Turk forces. It was genocide that claimed the lives of these hundreds of thousands of people, mainly Orthodox Christians, beginning in April 1915. They were Armenians, Arameans, Assyrians, and the Greeks of Pontos.

"Their fate is an example of the history of mass killings, ethnic cleansings, expulsions and genocides that so horrifically characterize the 20th century," the motion from the CDU and SPD reads. The parliamentary motion, supported by the CDU, the SPD and the Green Party, labels the killings "genocide." It's the right thing to do. The German parliament has been dealing with the events of 1915/16 for many years. The vote was meant to take place last year in April, but had been postponed to June 2. The term "genocide" is also in the official title of the resolution.

Now, the resolution focuses more clearly on the German role in the killings. "The parliament regrets the shameful role of the German Empire. As one of the Ottoman Empire's main military allies, it did not try to prevent these crimes against humanity, despite having clear information." This admission shows that history's main arcs are not a question of years or decades. That's something still evident today in the bloody conflicts in Syria and Iraq.

Another detail shows that, by remembering the events of a century ago, the German parliament is intent on the normalization of ties. On October 10, 2009, Turkey and Armenia signed protocols to begin diplomatic relations and open borders. It was celebrated as a step towards normalizing their historically strained relations. But the protocols were never ratified. The German parliament is now urging Turkey and Armenia to ratify them and to mark the beginning of a new era.

It's true that the parliamentary motion comes at a very inopportune time in terms of foreign policy. There's the Böhmermann affair, there's the refugee deal between Turkey and the EU, and there's the question of visa-free travel for Turks in the EU, which is part of the refugee deal.

But Turkey is also to blame for the ongoing foreign policy disputes. The kinds of scare tactics that some parliamentarians have reported work neither here nor there. The motion is not about blaming the current generation of Turks; it's about the responsibility the current generation of Turks have to acknowledge the darker moments in their nation's history - and not just its finer moments.

"The secret of redemption is memory," and it's through remembering that we find liberation. It's good that parliament is remembering. Good for the German people, and good for the Turks.

Have something to say? Add your comments below. The thread closes automatically in 24 hours.

The German parliament is expected to pass a resolution declaring the mass killings of Armenians by Ottoman forces during World War I genocide. DW’s Editor in Chief Alexander Kudascheff is against the motion. (01.06.2016)

Russian freezes bank accounts of US broadcaster RFE/RL 33m ago

COVID vaccines: Give doses to COVAX not kids, WHO urges 4h ago

Opinion: Elon Musk a liability for Bitcoin 5h ago