Opinion: 'Martyr bin Laden' and Khan's 'slip of the tongue' 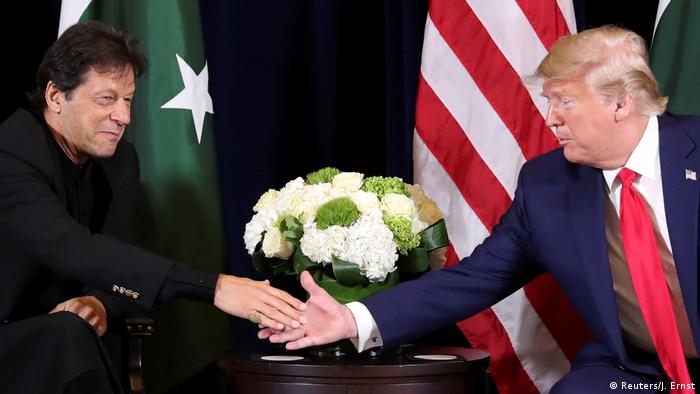 It is not a secret that Pakistani Prime Minister Imran Khan has a soft spot for Islamists, even for those who carry out militant attacks in Afghanistan and Pakistan. He blames the United States for destabilizing the Afghanistan-Pakistan region and justifies the Taliban militancy as a reaction to an imperialist invasion. But calling former al-Qaida leader Osama bin Laden a "martyr" is a new low even for Khan.

In his June 25 parliamentary speech, Khan was supposed to allay opposition's concerns that his government has badly mismanaged the coronavirus crisis in Pakistan. But he tends to digress. In an extensive speech, he spoke about many issues, including the war on terror and how it damaged Pakistan. This has been his political narrative for the past 19 years.

Bin Laden was killed by US forces in the Pakistani city of Abbottabad in 2011. Islamabad appeared to have cooperated with then US President Barack Obama in the bin Laden operation. It probably had no other choice but to support it. But the fact that the ex al-Qaida leader had been hiding in the garrison city raised many questions about Pakistan's anti-terrorism support. Let's not forget that Islamabad had received billions of dollars from Washington to go after al-Qaida and the Taliban leadership.

Pakistan's dubious role in the war on terror has always been a problem for the West, which needs Islamabad's support to manage the crisis but does not have control over the country's foreign and domestic policies. Islamist sympathy runs deep in Pakistan — both at state and societal levels. It is an instrument to stir up anti-India sentiment and keep the military generals in a powerful role.

Khan's close ties with the military are also no secret. Therefore, what Khan said about bin Laden is actually a reflection of the state policy. So let us not just blame the premier for saying something that many in the country's power corridors actually believe in. It is, however, not said openly, and definitely not in parliament.

Pakistan should also stop playing victim. Khan keeps reminding the world that Pakistan paid a heavy price for participating in the war on terror. Thousands of civilians and soldiers have been killed by militant groups since 2001. If those who killed innocent people are "martyrs," then the premier has no right to talk about his country's "sacrifice."

Dear Prime Minister, the people of Pakistan have indeed suffered immensely due to terrorism. Liberal politicians who took a stand against extremists were killed by militants. You, on the other hand, have maintained friendly ties with the Taliban. You didn't have to pay the price for challenging extremism and militancy.

Lastly, Mr Khan, progressive and secular people will continue to challenge the state narrative and your policies. There wasn't any doubt that you sympathize with Islamists, but now you exposed yourself even more. The fight against extremism will continue in Pakistan. You have made it clear which side you are on by glorifying bin Laden.