The Intergovernmental Panel on Climate Change (IPCC) seems to think restricting global warming to below 1.5 degrees is not realistic anymore. What sounds like defeat could be an opportunity, writes Jens Thurau. 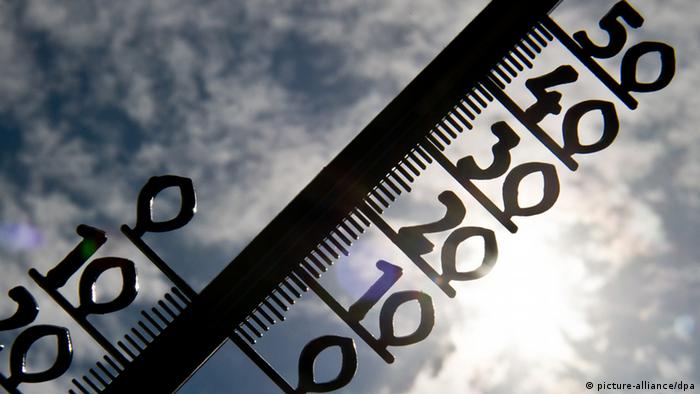 So far it's just a news item – the actual IPCC report won't be released until fall. But if media reports are to be believed, the world's leading climate scientists appear to be admitting defeat when it comes to international climate protection. Their message: You can forget about keeping global warming below 1.5 degrees Celsius.

"With a 66 percent probability, it lies beyond our capabilities," the IPCC is quoted as saying.

This infatuation with mathematical exactitude is one of the IPCC's trademarks. In the past, it frequently led to reports that were hard to understand. But this time, the meaning is pretty clear: our greenhouse gas emissions until now and especially states' current policies as well as their investments in the energy sector make sticking to the 1.5-degree cap practically impossible.

The triumph of Paris

A mere two years ago, this goal was at the center of the much-lauded UN climate conference in Paris. It was what small island nations and many African and Asian countries rallied behind to challenge developed countries to make their climate protection policies more ambitious. And they succeeded.

Until then, the global climate goal was to not let global warming exceed two degrees Celsius, always compared to the temperature at the beginning of industrialization 150 years ago. But since then humanity's massive burning of fossil fuels has already raised temperatures by one degree.

Trying to stick to the 1.5-degree goal would mean bringing the global economy to a screeching halt. That alone makes it completely unrealistic.

A lack of political will

But this doesn't have to be the end of climate protection politics. Around the world, solar and wind power plants are being built and investments in sustainable economies are being made. Technologically, humanity could probably already make do without fossil fuels – but not in practice.

Emerging nations and economic giants like China have growth rates so high that their hunger for energy is basically insatiable. Although they like to use new, sustainable energy sources, they are also still counting on coal.

In the old industrial nations, including Germany, the political will for a swift transformation is lacking. Car and energy corporations form a powerful lobby that wants to stick to the status quo. For a year now, a climate change denier has been sitting in the oval office in Washington. But at some point, the pressure of new technologies will push these people off the world stage.

The fatal problem is that the 1.5-degree goal, which experts now deem unrealistic, is an essential detail of the Paris Climate Agreement, which is only supposed to come into effect for real in 2020. So far, this number has been the main motivation for many poor countries to continue supporting the agreement, even without the ignorant US government.

- How would Bonn's prehistoric residents have seen the COP23 climate summit?

- Opinion: What actually happened at the Bonn climate conference — and why it matters

New honesty could be an opportunity

Maybe this new honesty on the part of the IPCC could present an opportunity. Developing nations in particular don't have many alternatives to keeping international climate talks under UN leadership alive. And saying goodbye to unrealistic goals that only caused frustration could maybe even free some energy.

The IPCC's clear words shine a light on what we're dealing with. The difference between an increase of 1.5 degrees and two degrees means more storms, a 10-centimeter rise in sea levels and probably the loss of the ice caps in Greenland and West Antarctica. The existence of many small island nations is at stake. Nobody can say anymore that they didn't know.

Niklas Höhne: Coal is really a technology of the last century

National climate pledges and writing the Paris accord rule book are at the heart of COP23 climate conference in Bonn. DW caught up with expert Niklas Höhne to get the latest. (15.11.2017)

Coronavirus digest: Germany to offer vaccines to children in 2022 58m ago

Coronavirus: BioNTech says vaccine safe for kids 5 to 11 1h ago

Manny Pacquiao to run for Philippines' president in 2022 3h ago