Failure on all fronts — the virus has brought chaos to EU governments and institutions. Solidarity has fallen by the wayside. It is time things changed, says DW's Barbara Wesel. 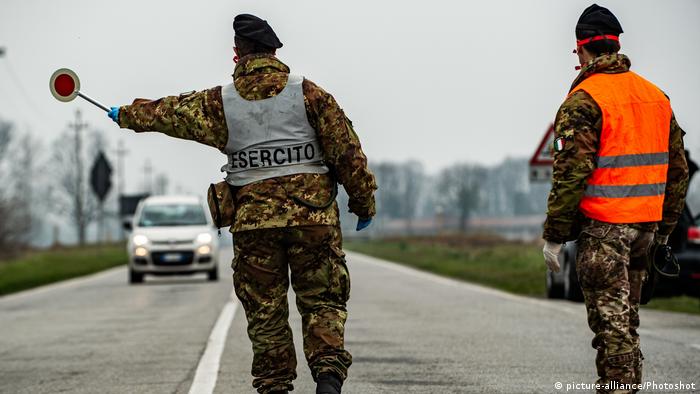 Run for your lives — that seemed to be European governments' motto at the beginning of the coronavirus crisis. They were uncoordinated, and everyone introduced measures without informing their neighbors. The result was a jumble of rules and advice. The result was a picture of a loss of control at the national and, above all, European level. Even the European Commission in Brussels has only now understood that the core of its credibility and the future of Europe are at stake.

The first thing that fell by the wayside, as always in times of crisis, was solidarity. It was Italy, the first country hit by the Corona crisis — and hit hardest of all — that had the bitter of experience seeing its strong neighbor, Germany, stop the export of medical supplies. This rightly led to huge quarrels among EU health ministers. It was a picture of miserable national egoism in the face of problems already becoming apparent south of the Alps.

France, by the way, behaved in a similar manner. In fact, Paris and Berlin opened the door wide for a propaganda campaign by the Chinese who flew doctors and supplies to Italy for publicity purposes. The political message to all the people opposed to Europe and all those populist skeptics was: When things get serious, everyone only thinks about themselves. Why didn't anyone in Brussels or Berlin come up with the idea to call the Italian government and offer help? The media reported in detail on the plight of Italian hospitals, the emergency measures and the deserted streets. So no one can say they didn't know what was going on.

The European Commission has only just launched a joint procurement of medical equipment. Daily video conferences between, say, health ministers and regular contacts between heads of government have only just begun to ensure that they really do share and coordinate their plans. So far, they have all been bobbing and weaving — probably to the best of their knowledge, but always with their voters in mind.

One thing is absolutely clear: We in Europe will either succeed together in containing the coronavirus and absorbing the economic consequences of the crisis, or we will fail separately. The spontaneous border shutdowns are one such example. A spokesman in Brussels put it diplomatically, saying their usefulness is doubtful because the virus has long spread across the EU. All the shutdowns do is cause endless lines of trucks and block the flow of goods. Countries that want to deliberately close off individual regions must organize shutdowns properly to continue to allow supplies and workers to cross the borders.

Keep an eye on the internal market

If the European internal market were to collapse, there really would be bottlenecks in the supermarkets. And the governments would look like liars who swore there were plenty of supplies and there was no reason to stockpile. A return to national self-interest within borders that have long since become fictitious may be a kind of conditioned political reflex. It may also reassure less astute voters, but in reality it achieves the opposite.

The same is true for measures to protect the population: If most EU governments now believe social isolation, closing restaurants, shops, schools etc is the way to go, they make the most sense if they are introduced in a coordinated way. The larger the areas in Europe where the spread of the coronavirus is slowed down, the better the chances for national health systems.

At the latest, a return to national self-interest ends with the economic fallout as Europe has long since become so interwoven that we can only overcome the threat of recession by working together. Letting Italy sink, for instance, is not an option — even the most stubborn nationalist must understand that. United, Europe is the strongest economic bloc in the world and can decisively shape policy in the coming months. Each country on its own, however, is only a drop in the ocean.

The countries all failed over the past weeks, they did not react in time or understand how big this crisis would become. Right now, the learning curve is steep and we can only hope that those in power at national and European levels have heard the message. We can no longer afford to waste time in the face of the rapid spread of the coronavirus; now, every day counts.

The only remedies for fear so far are common sense and solidarity. This is not a moral appeal, but a compelling call for joint action. It is clear that the world will never be the same. But it is still up to us whether we will even recognize it.

Philippines: Ferdinand Marcos Jr. sworn in as president 1h ago