US President Donald Trump is applying his usual game of intimidation and concession in his dealings with Tehran. But unlike with North Korea, this approach will not bear fruit, writes Matthias von Hein. 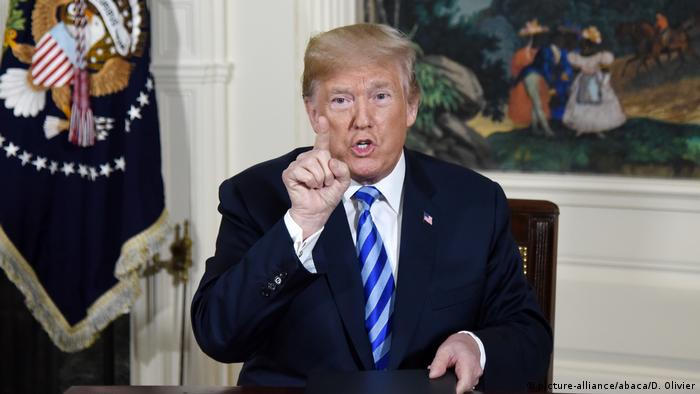 Anyone familiar with crime flicks will be familiar with the good cop/bad cop tactic of extracting information and cooperation out of an informant. Now, the commander-in-chief has introduced it to the world of international politics, with a twist: Trump plays both the cops simultaneously.

The US president's political schizophrenia — whether genuine or an act of calculated showmanship — has proven successful in that it, against all logic, led to a face-to-face meeting with the hereditary dictator of a long-isolated, rogue communist state. The summit with North Korea's Kim Jong Un actually happened, even if it delivered few concrete results.

With regard to Iran, Trump seems to pursue a similar good cop/bad cop approach. He recently took to Twitter to warn the country's leader not to threaten the US, promising severe consequences in future.

And these words are also matched by actions. Three months ago, the US abandoned the Iran nuclear deal (the Joint Comprehensive Plan of Action, or JCPOA) and imposed sanctions on the state. Now, Iran's economy is feeling the consequences. Inside Iran, pressure is growing, with political protests occurring almost daily. US financial sanctions take effect next week. But already today, the value of Iran's national currency, the rial, is plummeting. In the last two days alone, it lost 20 percent of its worth.

Representatives from the US State Department and the Treasury Department swarmed out to warn of buying Iranian oil. Now, orders are down and Iran, which depends on income generated from oil exports, is under intense pressure. It is getting ever clearer that these US measures are no longer merely aimed at changing Iran's behavior but instead at regime change.

But now comes the good cop: Trump has also offered to meet Iranian President Hassan Rouhani without preconditions and "whenever they want" — a conciliatory gesture that conspicuously diverges from his previously antagonistic stance. While switching back and forth from good cop to bad cop may work in the real estate sector, or may have proven successful vis-a-vis North Korea, it is not likely to land well in Tehran, and there are several reasons why.

Firstly, Trump has sought to meet his Iranian counterpart numerous times in the past already, without success. Iran claims Trump tried on eight occasions to meet Rouhani at the United Nations General Assembly last year.

Secondly, the US administration is speaking from both sides of its mouth: US Secretary of State Mike Pompeo, for instance, has insisted that certain criteria be met before Trump and Rouhani could meet, completely contradicting Trump's unconditional offers for a chat.

Thirdly, Iran is not nearly as politically isolated as North Korea, as Rouhani's recent visit to Europe demonstrates. And, unlike the North Korean leader, the Iranian president has no need for a photo op with the US leader to use for propaganda purposes and as an ego boost.

Given Iran's various centers of power and the skepticism about such a meeting on the part of Iranian Supreme Leader Ali Khamenei, the country's spiritual guide and most powerful man, it's very unlikely to happen. So lastly, even if they were to meet, why would Rouhani want to negotiate a new nuclear deal with the US given that the Americans have turned their back on an already existing deal? Iran would make a summit conditional on America reaffirming its commitment to the Joint Comprehensive Plan of Action. That is, if the dealmaker-in-chief is even genuine about wanting to reach an accord at all.

Secretary Pompeo and National Security Advisor John Bolton, in contrast, seem more interested in forcing Iran to capitulate. Roughly one year ago, Bolton — not yet serving in his current post – unveiled a detailed plan on how the US should leave the Iran nuclear deal.

That plan contains the following sentence: "Iran is not likely to seek further negotiations once the JCPOA is abrogated, but the Administration may wish to consider rhetorically leaving that possibility open..."

At a basic level, it would just be a good idea if Washington and Tehran started speaking again. The toxic relationship between the two could lead to open conflict should either side make a mistake regarding Syria, Yemen, Iraq or the Strait of Hormuz. Perhaps the two countries should simply take the classic approach and initiate talks through diplomatic channels, which were severed in recent months — talks that should be ongoing, well-thought-out, and not just a footnote at the end of a press conference. Because like any other, this relationship will take time and careful consideration.

The US President prides himself on being a hard-nosed dealmaker, but since entering the White House, Donald Trump has proven himself to be skilled in the art of tearing up agreements. DW takes a look at deals undone. (09.05.2018)

Opinion: Time for high-emitting Australians to vote for real climate action 18h ago