The new US president was markedly nervous during his first meeting with the chancellor. Merkel, who is highly respected in Washington, could help guide Trump in his new role as head of state, writes DW's Miodrag Soric. 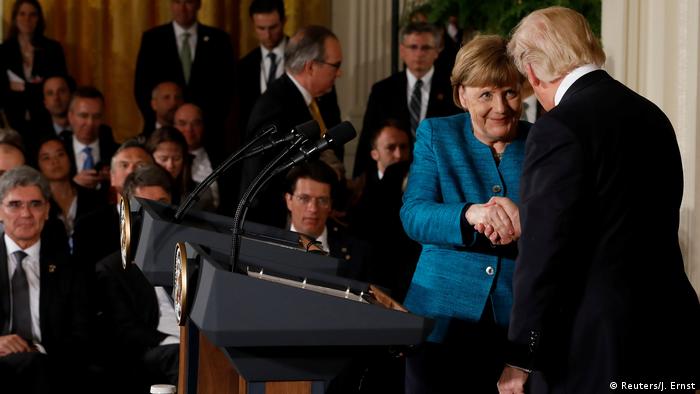 Anything but a bad start! Chancellor Merkel and President Trump were determined to put the emphasis on the common ground they share during their first meeting and downplay their differences - or not even address them at all. That's the plan they kept to, especially in front of press.

But it was still obvious how nervous Trump was in his role as host. This comes as no surprise, given that little seems to be going right for the president - not his immigration policy, not his relationship with the intelligence community or his health care reform. The last thing the president needed right now was a faux pas with one of the longest-serving female heads of government. With the exception of her refugee policy, which many Americans oppose, Merkel is highly regarded in Washington. Germany's economic strength is especially admired.

Trump is the third US president with whom Merkel has had to find a common language of a shared political understanding.

And she didn't do too badly in her first meeting with Trump. Merkel exuded confidence, ticking off her speaking notes one by one: shared values, a commitment to NATO, open borders within the EU, free trade, a better relationship with Russia - but only after an end to the Ukraine crisis. Her only jab at Trump was a remark that it would be "much better to talk to each other than about one another."

This was clearly in reference to Trump's outrageous criticism of Merkel during his presidential campaign, something the president is now eager to put into the past. Trump was markedly polite and courteous to his guest.

Both leaders allowed the other to have small victories: Merkel - again - promised higher defense spending. Trump vowed his unwavering support for NATO. But both leaders still clung to their divergent beliefs on other issues, such as trade. Trump did not mention the proposed trade agreement TTIP at all during the press conference. By contrast, Merkel stressed that both countries would profit from the trade deal. Behind closed doors, the two were likely more open about their differences.

Where the chancellor stands on important policy issues is well-established: her admiration for the United States, her commitment to NATO and the European Union, and her belief in Western values. It's Trump who has left people second-guessing where he stands politically with the statements he made on the campaign trail. Now it's up to seasoned politicians like Merkel or Japanese Prime Minister Shinzo Abe to rein Trump in, little by little. After all, it's the office that makes the statesman and not the other way around.

More meetings between Trump and Merkel are likely follow. During Merkel's first visit, tangible results were unlikely from the get-go. Trump is still growing into his role as president. Angela Merkel should help him, whenever German interests allow her to do so. Because in the end, nobody will profit from tension in the West. Not even its enemies.

US journalists had praise for their German colleagues after a White House press conference with Chancellor Merkel and President Trump. DW's Brent Goff said US reporters were "shocked" by the pointed questions. (18.03.2017)