As if the EU didn’t have enough problems, it’s being shown up by a tiny regional government. Wallonia in Belgium has blocked the CETA deal with Canada. But this particular problem has many causes, says Bernd Riegert. To point the finger at the rebellious Walloons and give the staunch socialist region the sole blame for the drama surrounding CETA is to only partially understand what's going on. The EU Commission, the member states, Belgium, and even Canada itself have had a hand in this disaster.

The Walloons, who feel left behind by international corporations, first signaled their concern to the Belgian government and the EU Commission members negotiating with Canada a year ago. In April, Wallonia's parliament voted against CETA in a resolution. At that point, the Belgian prime minister and the Commission should have woken up and begun working to counter their resistance. Instead, very little happened. The date for the EU-Canada summit was already set, and despite this, the various parties involved just let things slide.

With just a few days to go before the agreement was due to be signed, people were suddenly surprised that the Walloons were sticking to their guns. They felt emboldened by other member states that managed to push through special requests, or threatened to hold the deal hostage. Romania and Bulgaria were able to throw visa-free travel for their citizens back into the mix. The Germans insisted on three last-minute clauses that would allow them to back away from CETA should country's courts find a fly in the ointment.

Horst Seehofer, head of the conservative Christian Social Union (CSU), Bavarian sister party to Chancellor Angela Merkel's Christian Democrats, weighed in, saying it was only fair for national parliaments to have a say in the complicated CETA negotiations.

Then there is Belgium's hard-to-comprehend political structure, which affords its regional parliaments unusual rights when it comes to the agreement of international treaties. But clearly, this should not come as a surprise to the Belgian prime minister, nor to the EU Commission, which is based in Brussels. The state reforms of past decades and Belgium's complex federal structures were well known to anyone who wanted to know.

Aside from this, there is the issue of Belgium's German-speaking minority, consisting of some 70,000 people in the country's East. They have also not approved CETA, but their premier, Oliver Paasch, is hiding behind the Walloons. Perhaps the German-speaking community still has a score to settle with the central government in Brussels? It wouldn't come as much of a surprise, now that the capital region of Brussels has also refused to ratify CETA at the last minute.

But Canada has also made mistakes. In conducting negotiations, the Canadians relied too heavily on the EU Commission, underestimating the individual interests of the 28 member states. Canadian experts have now come to realize that when you negotiate with the EU, you're actually signing 28 separate contracts, not just one with the EU as a whole.

The CETA drama shows the limits of the European Union. The required unanimity makes it too cumbersome and easy to blackmail. For future negotiations with the United States (TTIP) or Japan, the EU needs a better strategy. The member states and the regions, too, have to be involved earlier, as the case may be. This is tiresome, but unavoidable. 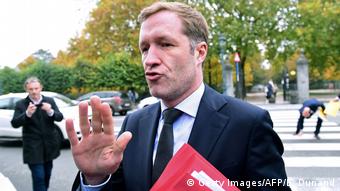 To outsiders, as well as insiders, the EU appears dysfunctional, once again. Even those EU-minded citizens are likely asking themselves what the bloc is good for if it can't even deliver in the area that's supposed to be its core competency: trade and the internal market.

Yes, the stalling of the CETA deal is embarrassing. But it's not the end of the world, or even the end of all trade agreements. Both sides still have overarching economic interests in this deal. We're still in the signing stage. The actual challenge - the ratification of CETA by the European parliament, 28 national parliaments and a range of regional parliaments (including Wallonia) is still to come. And that's when Saarland or Saxony, for example, will also have a voice, because in Germany, the federal states are part of the ratification process.

Looking back, it seems that the Walloons are just saying what many in the EU are secretly feeling: Mistrust about the consequences of global trade and a global economy. Re-nationalization is a growing trend. Britain's decision to leave the EU is one expression of this gloomy mood. In Germany, too, populists from both the left and the right are standing up against free trade and the EU. The referendum on the EU-Ukraine partnership deal in the Netherlands, the success of the nationalists in the presidential election in Austria, and Hungary's hostility to refugees are further symptoms of this crisis of faith. And the next vote, the next possible blow, is just around the corner: In Italy, Prime Minister Matteo Renzi will preside over a referendum that's being presented by his opponents as a vote on the EU, even if that's not what's written on the ballot. In reality, it's "just" a vote on constitutional reform.

Belgium 'not in a position to sign CETA,' says prime minister

Belgium's Prime Minister has said his country is unable to sign off on an EU-Canada free trade deal after Wallonia and other regions vetoed it. The deal is now not likely to be signed as planned on Thursday. (24.10.2016)

EU leader Donald Tusk and Canadian PM Justin Trudeau have declared their determination to see the CETA deal through in the face of Belgian opposition. Belgium's PM has said he can not sign off on the deal as it stands. (24.10.2016)

Russia: Alexei Navalny appeal fails, will move to a 'maximum-security' jail 7h ago