Opinion: Catalan nationalists transfixed on the past | Europe | News and current affairs from around the continent | DW | 19.10.2017

Opinion: Catalan nationalists transfixed on the past

Madrid is set to take action and limit Catalonia's autonomy. Barcelona still wants independence. DW's Barbara Wesel asks: What do the Catalan nationalists want? To live in the 21st century, or the 18th? 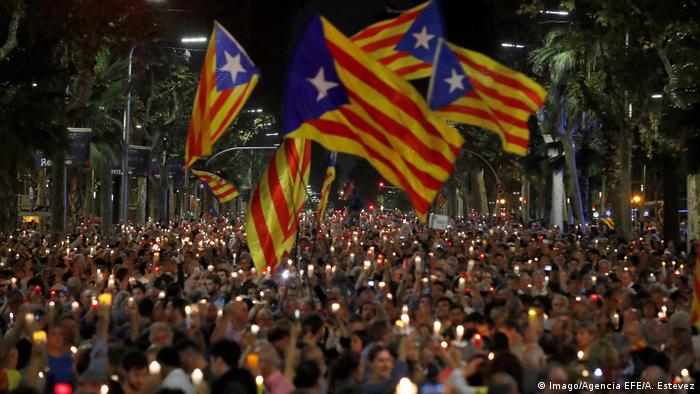 As expected, Spain's central government made good on its threat: It has announced it will take steps to enact article 155 of the Spanish constitution. The article opens the door to the severe limitation or total suspension of Catalonia's autonomy. The standoff between the regional and federal governments has escalated to such a degree that the prime minister was forced to act. He has committed himself to reestablishing law and order. Nevertheless, Barcelona remains unwilling to rescind the so-called declaration of independence recently issued by Catalan leader Carles Puigdemont. The situation is reminiscent of a massive pile-up on a foggy freeway.

The fog in this case is of a political nature. What we are currently witnessing in Spain is the absolute collapse of statesmanship. Prime Minister Mariano Rajoy seems devoid of any political instinct and is instead acting like a lawyer that is solely interested in the letter and not the intent of the law. He lacks the flexibility and emotional intelligence required of a head of state. He should have taken steps months ago to avert the escalation that has now made this situation so intractable. And the heavy-handedness that he has displayed in arresting independence leaders has only served to further impassion emotions and to galvanize the movement.

The Catalan government, however, is acting just as absurdly: It is driven by ideology, it is stubborn and, above all, irresponsible. The situation in Barcelona seems fatally similar to student council politics: heated rhetoric, heroic decisions and no talk of consequences. Their assumptions are nothing short of irrational. Those fighting for independence are unimpressed by companies leaving the region and the economic loss that has brought about. Not even dwindling tourism numbers have gotten their attention. Sacrifice is what is required of those with big dreams.

Identity politics and the will to power

But, for what kind of nationalism are the barricades being built? The movement is about the kind of identity politics that seems to be spreading these days: One geared toward differentiation, and arrogant in relation to neighbors. The movement is fueled by a populism that expertly incites emotion through clever propaganda and the masterful manipulation of social media.

Nevertheless, behind all that is simply the banal will to power of Barcelona's leading figures. The Catalan regional government has gotten quite comfortable in its relationship to power and has thus far managed to shake off all corruption accusations leveled against it. But its members are also under the impression that they can up their ante further still. Carles Puigdemont wants to go from being a regional president to becoming a true head of state; someone that takes part in summits and has his place on the international stage.

Looking back rather than forward

The problem is that none of this adds up. The Independistas have tied their national identity to a lost battle in 1714 – when the Spanish king took Barcelona in a surprise attack. Catalonia has not been independent for more than two centuries, and many there feel as if they need to make up for lost time. The situation reminds one of Brexit and all of the other irrational flights of historical fancy.

But what is the movement really about in the end? Catalonia is Spain's economic motor, and it is globally successful. That success, in turn, only functions because of Spain and the European Union. Major corporations are pulling operations out of Barcelona in droves – they have desire for neither unclear legal circumstances nor for over-emotionalized nostalgia. The region lives and works in the 21st century but it has fixed its gaze on the past, on the 18th century – on the days of King Philip V. It is an impossible balancing act. Those leading Catalonia's independence movement have to decide just where they want to be, and they must decide to make that the present, otherwise they will unquestionably doom themselves to the ash heap of history.

Exodus – companies head out of Catalonia