Catalan independence remains a long way off, but were it to happen, what would a Catalan economy look like? The industrialized region is economically strong in its own right but the politics make things complicated. 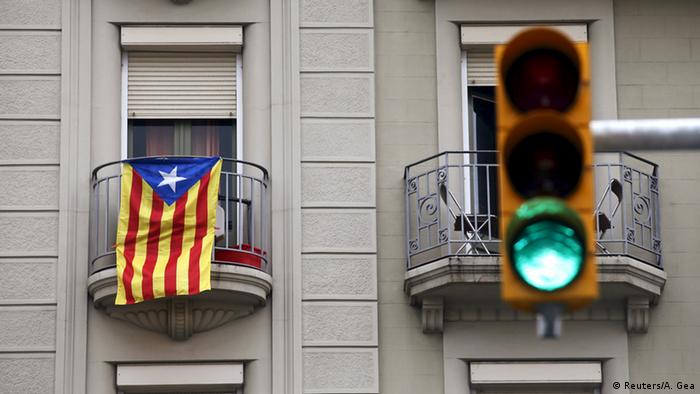 The idea of an independent Catalonia has been mooted for the best part of a century, but the events of the past fortnight have dramatically thrust the issue into the heart of European political and economic debate.

Tuesday's news that Catalan president Carles Puigdemont has suspended the autonomous community's declaration of independence for now, pending negotiations with the Spanish government, has taken some of the immediate sting out of what amounts to Spain's most serious political and constitutional crisis since the end of the Francisco Franco dictatorship in 1975.

While the future remains very uncertain, what is clear is that the issue is not going away. One of the most consistent arguments in favor of Catalan independence has been an economic one — supporters say Catalonia would be more than able to go it alone, given its significant weight within the overall Spanish economy. 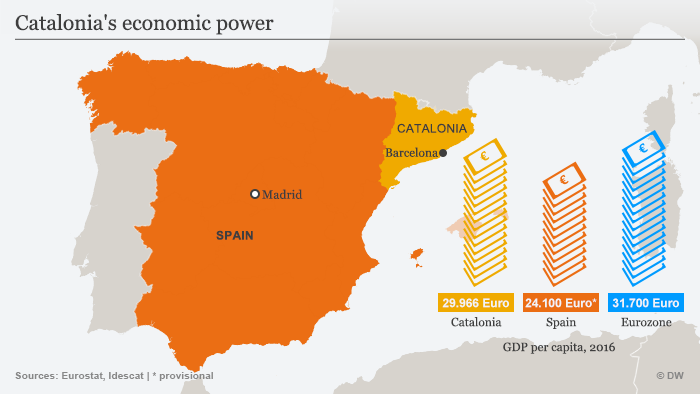 Setting aside the politics though, if Catalonia were to achieve full independence, what would the economy of a sovereign Catalonia look like based on its current size, and where would it rank within the wider European picture?

If an independent Catalonia existed within the EU, its population of 7.5 million people would make it the 15th largest country in the bloc.

Based on 2016 figures, when its nominal GDP was valued at around 211 billion euros ($249.4 billion), it would account for 1.4 percent of the EU's collective GDP figure. That would rank it in 13th place in the EU, behind Denmark and Ireland but ahead of Finland, Portugal, Greece and the Czech Republic. 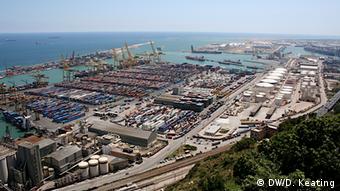 In terms of international trade, an independent Catalonia — based on 2016 figures — would be a significant player. According to official Spanish government figures, Catalan exports were valued at 65 billion euros in 2016, which would rank it in the top 40 worldwide and in the top 15 of EU nations.

Relative to the rest of Spain, which has been severely hit by unemployment since the 2008-2009 global financial crisis, Catalonia's employment figures have held up reasonably well.

Its youth unemployment rate (for those aged 15-24) stands at a very high 34.3 percent but remains considerably less than the overall Spanish rate of 44.4 percent. In terms of overall unemployment, Catalonia's rate stands at 13.2 percent whereas the Spanish rate is 17.1 percent. The current EU average is 7.6 percent.

An industrial hub, a tourism jewel

The Catalan economy is highly industrialized; industrial activity accounts for 21 percent of its GDP, more than Spain but slightly less than the eurozone total of 25.1 percent. Its main industrial sectors are in food, chemicals, motor vehicles, energy and pharmaceuticals.

Its long-established reputation as the industrial heartland of Spain has made it a hub of foreign direct investment (FDI) — it attracted almost 5 billion euros of FDI in 2016, according to official Spanish figures.

Along with industry, tourism is a vital component of the Catalan economy and would likely form a centerpiece of the economic vision of any future independent administration. Based around the travel jewel that is the city of Barcelona, tourism accounts for 12 percent of current Catalan GDP.

Anything but plain sailing

At first glance, Catalonia's digits appear to more than stand up to scrutiny — it already ranks as a major economy in its own right by most measures. Yet ultimately it is impossible to make a meaningful assessment of what an independent Catalan economy would look like without considering the profound political implications of secession from Spain.

Were Catalonia somehow to achieve independence, EU membership would be anything but assured, particularly in the event of a messy divorce. That would have major economic implications for the region, especially in terms of trade.

The nature of its future relationship with Spain, both on a political and economic level, would also be absolutely essential to its viability as a fully independent nation.

Already, the instability of recent weeks has had economic consequences. Although currently the main focus of investment in Spain, capital would quickly flee from Catalonia in the event of continued instability. German business leaders have already said as much, while Germany's EU commissioner Günther Oettinger described the situation last week as "very, very disturbing."

On top of all that, there are other concerns about Catalonia's level of debt as well as other structural issues, such as its high level of youth unemployment.

Catalonia may well be able to go it alone one day, but it would be anything but plain sailing.