Opinion: Armenians must forge their own future

It's surprising how quickly Armenian Prime Minister Serzh Sargsyan gave in to pressure from the streets and resigned. After such fast-paced change, it is not clear where the country is headed, says DW's Miodrag Soric. 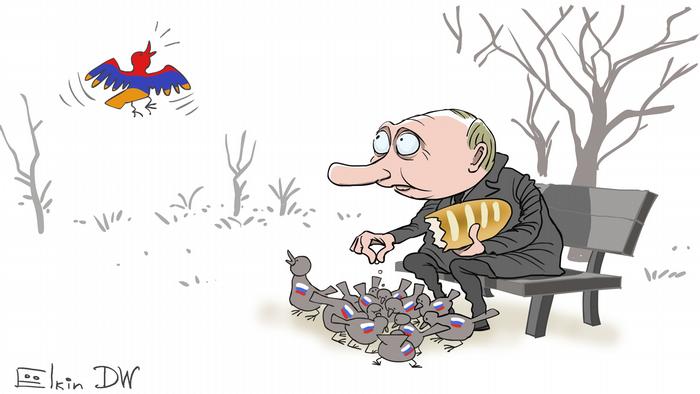 The Armenians are a proud people. And they have good reason to be proud: Over the millenia, they survived a changing history while retaining their identity, and they were the first people who declared Christianity to be their state religion. All over the world, the Armenian diaspora supports its homeland and ensures its economic survival. Now Armenians can be proud of the past weeks' peaceful revolution. Pressure from the streets forced Prime Minister Serzh Sargsyan to resign — only the beginning of a change Armenians have long pined for.

Sargsyan belongs to a group that came to power after the war over the Nagorno-Karabakh territory along the border with Azerbaijan; ever since, he and a handful of oligarchs have controlled the country's politics and economy. Many elites have profited at the expense of the Armenian people. Why are Armenia's food prices higher than those in neighboring Georgia? Why do few people invest in the local economy? There is corruption as far as the eye can see.

For a long time, the people grumbled. These past weeks, they took to the streets, led by a fearless Nikol Pashinian: Armenia can't stop now, "halfway down the road." The prime minister's resignation is not enough, he says, urging transparent voting legislation, swift new elections, and the disempowerment of the network of businessmen, politicians and officials who have made the state their prey. Pressure from the streets must not slow down, he says. Pashinian and his camp have concrete plans for the future. They are realists, not romantics who lose sight of the future in the flush of victory.

Various strategists in Washington are already dreaming of Armenia's political reorientation. That has little to do with reality, however: Russia will remain Armenia's protector state for the foreseeable future. Any other scenario would ignore the political, economic and cultural facts — and the Armenians' wishes, too, by the way. For historic reasons, they feel particularly close to Russia, which doesn't mean Yerevan can't also have a good relationship with the West. The 2017 accord with the EU is a sound basis, and complements Armenia's membership in the Eurasian Economic Union (EEU). But these treaties are worth little if the people stay poor. It is up to the Armenians to create a framework for more investment, to fight corruption and keep the oligarchs in check.

Angela Merkel: Germany will come out 'stronger' after pandemic 8h ago

Opinion: Shall I be mother? When doctors make the worst patients 0m ago

Opinion: Twitter's Trump ban is no Chinese-style censorship 19h ago