Opinion: Angela Merkel's Harvard speech is noteworthy for what she didn't say

German Chancellor Angela Merkel's poignant and personal commencement speech at Harvard University was also a thinly veiled appeal to reject Trumpism. But more interesting than what she said was what she did not say. 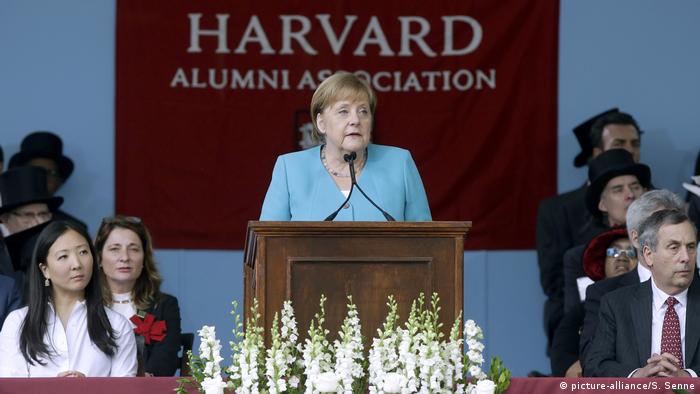 Chancellor Merkel's address came at an opportune time. It allowed her to escape, if only for a few hours, the political turmoil back home in Germany that was triggered by the poor performance of the parties that form the coalition government she leads in the recent European Parliament elections.

More importantly, it gave her the opportunity to speak in the United States at a critical juncture in the transatlantic relationship that has deeply strained since President Trump took office. That she did so in Boston at the country's leading university, which has close and historic ties to Germany, and not in the capital Washington gave her more rhetorical room to get personal.

It was welcome that Merkel's Boston sojourn was unencumbered by a meeting with the US president, which would have altered the nature of the entire trip and overshadowed her speech at Harvard University. And as anybody who observed their previous two meetings at the White House can attest, they yielded few tangible political results and did not change the dynamic between the two leaders.

Having said that, even without a bilateral meeting with Donald Trump on the itinerary, and without mentioning him directly in her remarks, the president was clearly on Merkel's and her audience's mind.

That's because some of the chancellor's biggest applause lines were thinly cloaked appeals to counter President Trump and his "America First" brand of politics:

"More than ever our actions have to be multilateral rather than unilateral."

"Don't disguise lies as truth, and truth as lies."

"Tear down walls of ignorance and narrow-mindedness."

These straightforward rejections of Trumpism were some of the strongest passages in her speech, along with the instances where she opened up a small window into her personal life.

"Every day I had to turn away from freedom at the last minute," is how Merkel vividly described how as a young woman living in East Berlin she literally used to walk by the Berlin Wall, but could never cross over to the other side.

Merkel's personal passages and her appeals to reject Trumpism were important and affirmative in nature. They clearly expressed a shared sentiment with her audience. But even more interesting was what the chancellor did not say.

"Nothing ever stays the same"

While she lauded the values-based transatlantic partnership that had benefited both sides for more than 70 years, she did not offer a vow or a prediction that it would be around for another seven decades. The transatlantic defense alliance NATO, for example, routinely assailed by Trump, did not feature in her remarks.

That she did not offer a full-throated promise to fight for the transatlantic partnership at a venue like Harvard University is telling and could serve as an indicator that she is convinced that the key theme of her speech, "Nothing ever stays the same," also applies to the transatlantic relationship.

Equally telling were Merkel's heart-felt statements that solving the big global challenges like climate change, the eradication of hunger and the elimination of diseases was possible. Her "Wir koennen das alles schaffen" (we can do all of that) rhetoric not only echoed Trump's predecessor Barack Obama, but also her own words from four years ago when she expressed her conviction that Germany could cope with the arrival of a large number of refugees. But beyond the affirmation that those big problems could be solved, she did not offer a roadmap of how that could be done.

It is probably too much to expect a commencement address to provide such a blueprint, but it was still noteworthy that despite the globalist theme of Merkel's speech, her only concrete political promise was a national one — to do everything humanly possible to ensure that Germany achieves climate neutrality by 2050.