On the Spot: Michael Rensing

Michael Rensing is the number one goalkeeper at Bayern Munich - taking over from Oliver Khan. So, how do you fill the shoes of a legend? And how do you deal with criticism? 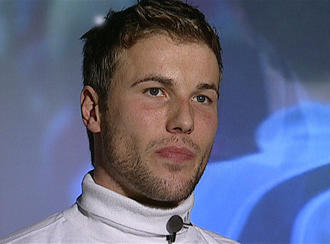 What makes you ask that?

That's the tatoo on my back, at the top. I had it done four or five years ago. I really wanted to get a tattoo. But not one that was likely to lose it's meaning. That Latin phrase stood out because firstly, I'm very religious. And secondly, because it is the name of a Jesuit Order in a book from Paolo Coelho - and I've read all of his works. I thought - my faith is something I will have for life and I will always represent. It has meaning AND it looks good too.

Can you translate it?

Latin was my favourite subject at school. Rigor means strength - like rigourous. Amor is love and Misericordia is mercy. I think those words show a certain direction for how to live your life.

You also wanted to walk the Way of St. James.

I've actually done part of it already. I went to a school run by monks, before I moved to Munich. Just a few weeks before I came here, my whole school travelled to France and then went to Santiago de Compostella. We took the bus occasionally, then walked and camped.

For two weeks Michael Rensing went on a pilgrimage, 800 kilometres long. Just like any other pilgrim.

That's something that I like to look back on. You get rid of all the superfluous things. And you realise how unnecessary many things are. Then you find yourself, you think about your life and you become peaceful. It's a dream of mine, when I am finishing my football career and am still fit enough, to walk the entire route.

Rensing first played in the Bundesliga aged 19. At first he was only a substitute. The prolonged career of Olli Kahn meant that Rensing had to wait to get regular game time. Still, in four and a half years, Rensing didn't lose a match.

You were a bit angry when Karl-Heinz Rummenigge - Bayern's chairman - asked Kahn to continue after the 2006 World Cup.

I wasn't enthusiastic about it, that's for sure. I was in good form and had played a few games that had gone well. I would have liked to have been in goal. So it was hard, but, it was somehow understandable. Olli defined an era and if he wanted to play on, then I had to accept it. Now I'm the first choice goalkeeper, so, it worked out in the end.

When I look at your on-field presence you seem to consciously want to give the team a shake-up sometimes. Did you learn that from Oliver Kahn or is that just how you are? Or did he change you a bit?

No, not at all. People are always saying I shouldn't copy Olli Kahn. But I do think that our characters are similar. I have also been able to learn a lot from him in the last years. But I don't just do something because someone else did it. I do it because I'm convinced of its effectiveness.

Rensing still isn't at the level of Kahn. But he's certainly got lots of talent. But in Germany at the moment young goalkeepers are often celebrated one day, then canned the next. It doesn't matter whether you are Michael Rensing, Manuel Neuer or René Adler.

How do you judge your career at the moment? Who's the country's best goalkeeper?

The media is always interested in Bayern. There always has to be something going on. Either everything is going great - is world class - or something has really gone wrong. If someone in the national team squad makes a mistake then it is just discussed briefly and then the matter is finished. Regarding who is the best, well, I'm not going to name anyone. Personally, ofcourse I would like to play for the German national team - it's a topic people ask me about a lot. But that is like concentrating on the third step before I've completed the first steps. I want to perform well here and keep improving. If I do that, I'll have an excellent chance of making the national team. But at the moment I'm not even thinking about it. I'm just concentrating on Bayern and would like to my job here and win some titles. The rest will just take care of itself.