On the fence: Traveling along Poland′s border with Belarus | Europe | News and current affairs from around the continent | DW | 30.01.2022

On the fence: Traveling along Poland's border with Belarus

For months, Poland's side of the border with Belarus was off-limits to aid workers and media as displaced people attempted to cross to the EU. Now, journalists are allowed in again, under strict controls. DW went along. 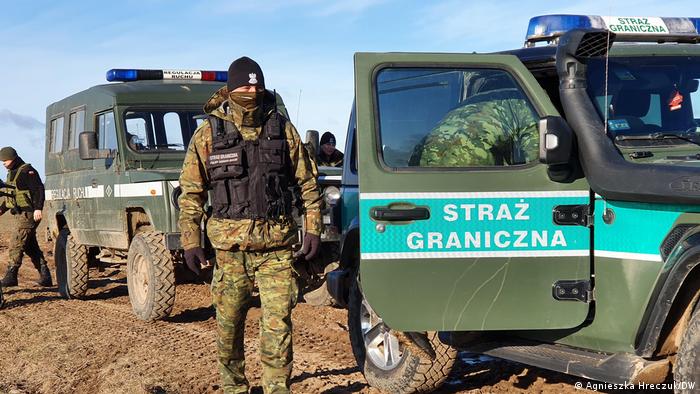 On the main street of Szudzialowo, a village in eastern Poland, uniformed soldiers walk back and forth between the village store and two container warehouses, carrying bags with buns or Coke.

Some wear balaclavas, carrying weapons that send a chill down the spines of visitors.

After five months, residents have grown used to the sight of the heavily armed soldiers, said Hania, who lives in a neighboring village. "At first I associated it with war, but now I don't react at all," she said.

Some neighbors even feel safer since the soldiers have been here, she said. The villagers may assume that the military is there to defend them But against whom? Against migrants. Or against Lukashenko. Or Putin. It doesn't matter: The main thing is that the locals feel protected.

At the local health center, a sign hanging in the window says "thank you." Everyone here knows for whom it's meant. Next to it, on a fence in the center of the village, hangs a banner with the inscription "#muremzamundrem." Loosely translated, it means: "We stand behind you like a wall." Again, it's meant for the soldiers.

Szudzialowo is a village in eastern Poland, barely 10 kilometers (6 miles) from the border with Belarus. Just behind it is the forbidden zone, where a state of emergency imposed by Poland has prevailed since September 2.

Since then, only residents, utility companies, rescue services, police and the military have been allowed to enter the area. Refugee aid workers, journalists and humanitarian organizations, including the Red Cross, are prohibited from entering.

Since the beginning of December, the authorities have been allowing members of the press to make "journalistic visits" to the restricted zone on the border with Belarus — but only under strict controls.

Polish journalists who have visited the region "embedded" in this manner have spoken of the experience being akin to a "safari": a strictly monitored tour with a fixed route, during which participants are allowed to "get to know" the border area through the car window. We went along. 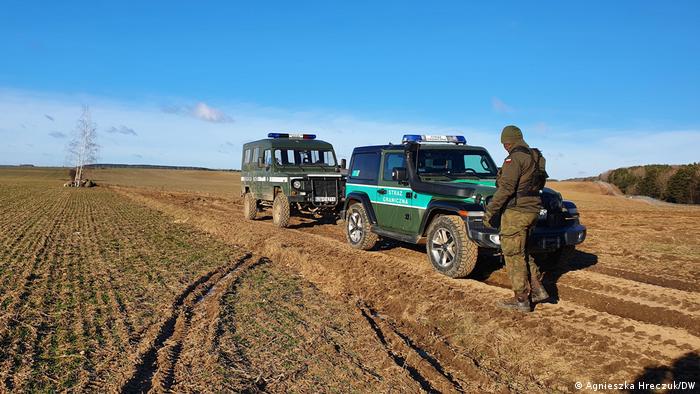 In Szudzialowo, we received passes that allowed us to be in the restricted zone at a designated time and only in the company of Polish border guards. Then we got into a military jeep that raced along country roads and across frozen fields as if we were being chased. Speed limits and other traffic rules don't seem to apply here.

The uniformed driver wore a mask that covered his face and remained silent during the entire trip. When we asked questions, he referred us to the press spokeswoman of the Polish Border Guard, who was in a jeep ahead of ours.

The spokeswoman decided where we stopped and what we saw. At our first stop, soldiers stood in a field in front of a razor wire fence. In the past, she said, there was no need for such barriers at the border because there was good cooperation with the Belarusian border guards. In a private conversation, she even told us that the guards of the opposite sides of the border even took joint canoe trips together. 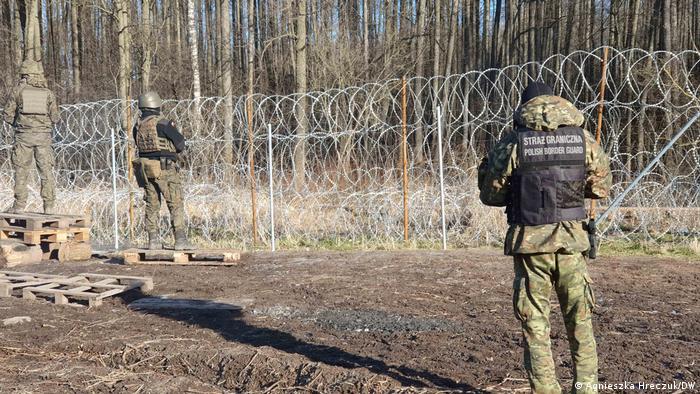 Polish soldiers at a razor wire fence near Usnarz Gorny

But now, she said, the Belarusian guards work with migrants to cut the razor wire together and blind Polish soldiers with mirrors to enable illegal border crossings. The barbed wire is soon be replaced by a high fence, she said.

This high fence, popularly known as "the wall," has been officially under construction since January 24. It will consist of 5-meter (16.5-foot) posts topped with barbed wire and equipped with motion detectors and infrared cameras.

About 180 kilometers of the border will need to be paved, at a price of roughly €355 million euros ($396 million). Environmentalists and local residents have long protested the installation, as the fence will cut through the virgin forest at the border — disrupting the habitat of several wild animals.

We stopped in front of a car parked in the middle of a field. From the loudspeaker on the roof, messages blared out in English, French, Arabic and a Kurdish dialect, telling the migrants on the Belarusian side of the border that they had been cheated, that crossing the border into Poland is a punishable offense and that they should return to Minsk , the capital of Belarus. 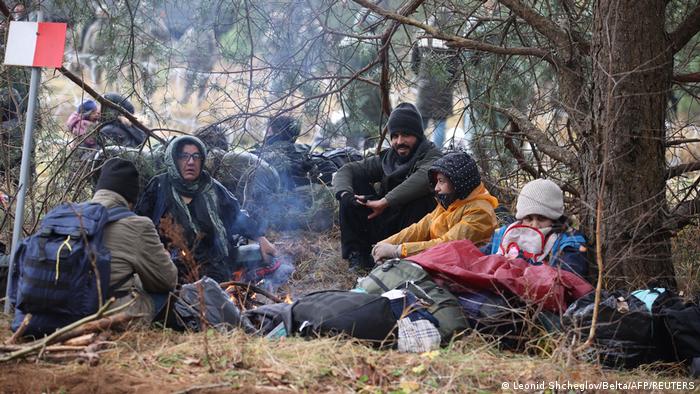 We reached Usnarz Gorny. It was near this village that refugees from Afghanistan were stuck in limbo for two months on the Belarusian side of the border in the summer of 2021 — blocked on both sides by the national guards.

The refugees received help from activists and lawyers, they even applied for asylum, but they were not allowed on Polish territory.

We saw remains of the makeshift camp that housed the refugees: tents, blankets and bags. The area has not been cleaned up. "We are not allowed to do that," the Polish police spokeswoman said. "All the things are on the Belarusian side." That was also the argument used in the summer of 2021 to explain why Poland could not help  people sleeping rough in the forest. 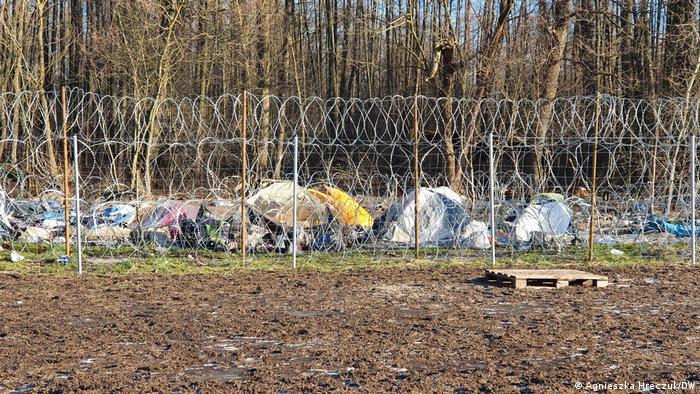 Now the place is deserted. "One day they were suddenly gone, probably taken away by Belarusian authorities," the spokeswoman said. In October, the Polish border agency reported that a group of Afghans had broken through the fence into Poland and were detained.

According to activists, pepper spray was used against the migrants. Then they were reportedly driven back to Belarus. We asked the spokeswoman what she knows about it.

"Anyone who needs help will get it," she said, "and anyone who wants to apply for asylum can do so."

Agata Ferenc, of the Ocalenie Foundation, which supports refugees, was in Usnarz Gorny before the area was closed. Since then, she and some fellow volunteers have been trying to help from outside the restricted zone.

Aid workers still receive about a dozen calls a day from people in need of help who are stuck somewhere along the border. "The first thing they usually ask us is not to inform the border guards," Ferenc said. "They know the border guards will send them back to Belarus if they are found."