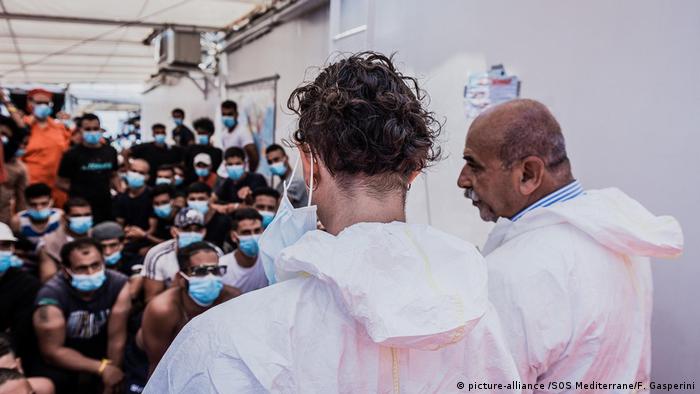 Close to 180 migrants aboard the private rescue ship Ocean Viking will be transferred to a quarantine vessel on Monday, soon after Italy carries out coronavirus testing on board, according to multiple sources.

Ocean Viking had picked up migrants as a part of four different rescue operations as they fled Libya, according to the European maritime-humanitarian organization SOS Mediterranee.

The situation on board the Ocean Viking had grown increasingly desperate after being rejected or having docking requests ignored from seven ports in Italy and Malta, resulting in multiple suicide attempts by migrants on board, SOS Mediterranee had said in a statement on Friday.

Italian authorities have sent a medical team to assess the situation on board and conduct coronavirus testing before the migrants are transferred to the quarantine ship Moby Zaza in Sicily on Monday.

The pandemic had resulted in a refusal to allow the immediate disembarkation of rescued sea migrants by both Italy and Malta, resulting in heightened tensions.

German Interior Minister Horst Seehofer has called on more EU states to accept migrants rescued from the Mediterranean, stating that only five or six countries have done so.

Seehofer told the newspaper Welt am Sonntag that he hoped a new political agreement on migration will be pushed under Germany's EU Presidency. This would include a comprehensive framework with initial examinations of asylum petitions along with the repatriation of people whose applications did not meet the standards for protection.

"Only those who can credibly establish a claim for protection will be distributed within the EU," he added.

Climb on board the private rescue ship Ocean Viking for Tales from the Border’s second episode. Listen to the relief as the 'Big Boat' arrives to rescue a group of migrants adrift in the Mediterranean.

Ocean Viking ship rescues more than 500 migrants in the Mediterranean 05.07.2021

The aid agency SOS Mediterranee says it has saved a total of 572 people in the Mediterranean Sea in recent days. Those rescued include more than 100 children, the vast majority of them unaccompanied.