UN Secretary General Ban Ki-moon commended Nigerians for holding largely peaceful elections, as voting came to an end on Sunday. DW spoke to a local election observer about the claims of irregularities in Rivers State. 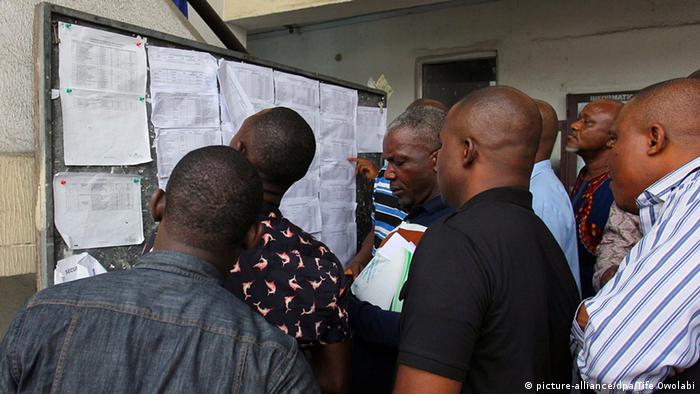 Election results are expected on Monday March 30, 2015. While election observers are still collating their findings, Ibrahim Zikrullah of the Transitional Monitoring Group (TMG) gave DW an insight into his impression of how the elections went.

DW: What are your preliminary findings about the elections so far?

Ibrahim Zikrullah: I think the election was generally fair. Of course we have Rivers State, where the election did not meet minimal standards of any recognized election. The state security took over the role of INEC. They were beating up people, smashing ballots and falsifying results. The problem with the card readers did not help matters because in some places they couldn't verify the Permanent Voter Cards (PVC). And in our view the manual verification compromised the purpose of the card reader.

So you're saying that claims from the opposition All Progressives Congress (APC), that there were irregularities in Rivers State are founded.

Yes. As I speak to you, there are huge protests at the INEC headquarters in Rivers State. In most of the polling units, result sheets were not delivered and those were the sheets that were falsified.

Were there irregularities in other Nigerian states?

In Akwa Ibom observers were chased away. Two of our observers were arrested. They were released late at night. Even when they could not find anything criminal about them and they were identified by INEC, the police insisted that they should pay bribes. We started spreading the news through social media and people started commenting on it until they released the two observers. And people were chased away. Party agents were chased fom the polling units and at the end of the day, results were declared in some polling units.

We also had a case in Gombe, in the polling unit where the governor cast his ballot. The results were moving in favor of the opposition and some people accompanied by police came and snatched the ballot box away. So we have pockets of those scenes.

Do you think these irregularities will affect the outcome of the polls?

I don't think so, because we have 36 states plus Abuja, so 37 in all, and 774 local governments. I think that if we have irregularities in four to five percent , they can't be used to judge the election as not valid. However in those areas where there were irregularities, the results could be cancelled and fresh elections organized.

Your organization is also doing its own tallying of results. Can you describe how that works?

We have 4,000 observers who go to the field and confirm their data through coded text messages. The system analyzes the data that comes in and we are able to understand the trends of the election in real time.

For example, yesterday, we reported about the arrival of the election officials at 7:30 a.m. At 11:30 a.m. we were able to report about the setting up of polling units that had opened for accreditation. We reported on all the processes up to the voting.

What we don't immediately reveal, is the results. We collect results from the polling units where they are still very pure. The experience has shown that when the results are being moved from one polling unit to the next, we begin to see additions and subtractions. And we have a margin of error. So if the results that are declared by INEC fall within the margin of error, we can confirm that the result is justified. The moment they begin to diverge from this, we can expose the fraud.

So on a scale of one to ten, how would you rate the polls on credibility?

I think I can give it an eight.

March 28,2015: Nigeria heads to the polls to vote for their next president and parliament amidst heavy concerns over the country's security. We bring you reactions and discussions from around the web. (28.03.2015)

There are no results in Nigeria's presidential elections yet. But while there were technical mishaps and some violence, too, the vote is a success so far, says DW's Thomas Mösch. (29.03.2015)

Ballots have started being counted after thousands of Nigerians voted on the second day amid technical glitches. Boko Haram militants were also suspected of killing people in the northeast while fighting Nigeria's army. (29.03.2015)