Voting has ended in many parts of Nigeria. It was a thrilling election day across the country. Check out our blog for a comprehensive overview of the developments until 6:00 p.m. 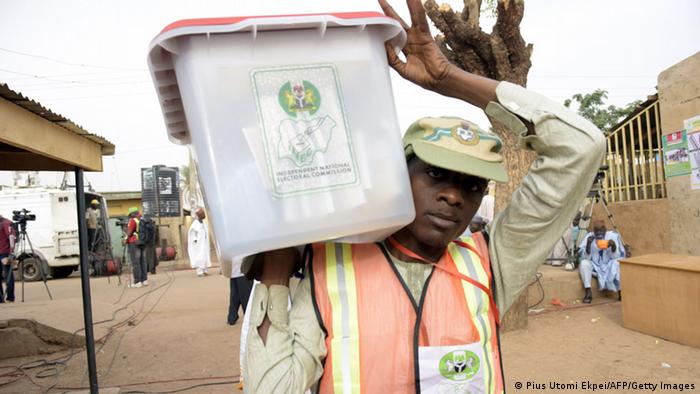 18:02 Polling stations were officially supposed to close at 18 hrs. But voting continues in many parts of Nigeria tonight and on Sunday. Our colleagues from DW’s news team will keep you updated on our website and on DW-TV. We will end our blog here. Thanks for keeping us company and good night from Germany!

18:00: Counting begins in some polling stations.

17:02 The electoral commission (INEC) says that rumours of manipulated ballot papers are wrong.

16:52 Technical failures due to protective film?

Twitter user are speculating whether the failure to register voters could be due to the protective seal on the card reader. There is no official confirmation about this.

16:26 Reports about violence in various locations across Nigeria: The military confirms that a soldier has been killed in Port Harcourt. Boko Haram militants are said to have killed 23 people in a village in Borno State in the northeast, according to German news agency DPA.

16:09 The electorial commission says that voting had to be suspended in some places because of technical glitches. In those areas, voters will get another chance to cast their ballots on Sunday.

15:16 Polling is already underway in some polling stations while others are still registering voters. Voting was officially due to start at 1:30 pm (GMT+1).

14:51 Tweets from our correspondents Jan-Philipp Scholz and Adrian Kriesch in Abuja and Lagos

14:31 More reports about violence trickling in: Boko Haram fighters have killed six voters on their way to polling stations in Gombe and Yobe states, according to agency reports.

14:20 The website of Nigeria's Independent Electoral Commission is back up and running after the site was attacked by hackers earlier today. http://inecnigeria.org/

14:05 Nigerian journalist and election observer Cynthia Nyamai shared the highlights of her polling day on Twitter. She wrote: "I'm glad to serve Nigeria as an observer. Happy to report the voter turnout is better than expected #NigeriaDecides" and shared this:

13:53 Voters tell DW's Uwais Idris in the capital Abuja how the registration process went for them. Listen to what they had to say.

President Goodluck Jonathan and his wife Patience Jonathan have managed to register manually.

The website of Nigeria's Independent Electoral Commission (INEC) is currently not working. There are reports that it has been hacked by an unknown group who called themselves the "Nigerian Cyber Army."

Before the site was taken down, a message read:

"Security is just an illusion ... INEC don't try to rig because we have been watching you." (DPA)

12:12 Attack
Two people killed in suspected Boko Haram attack on two polling stations in Gombe State in Nigeria's North. According to news agencies, another voter in the area said that insurgents shot into the air and said that they had warned people not to vote.

11:10 Voter Registration underway
While polling stations are open and voter verification has begun, there are news of an explosion at a polling station in the eastern Nigerian city of Awka of Anambra state. (Reuters)

10:48 Technology fails Jonathan
Incumbent President Goodluck Jonathan has acccording to news agencies left a polling station after he was unable to accredit himself and his wife. "It's the first time we are using this technology, PVCs (permanent voters card), card readers," Jonathan admitted as he pleaded to voters to be patient. (AFP)

Denmark's ambassador to Nigeria, Torben Gettermann tweeted from a polling station in Kwali, just outside the capital Abuja.

10:00 Nigerians queue up to verify their new permanent voter IDs. Voting is due to start at 1:30 p.m.

Facts about the elections: