US President Barack Obama has said that China must stop reclaiming land in the disputed South China Sea. His comments come during a visit to the Philippines for the Asia-Pacific summit. 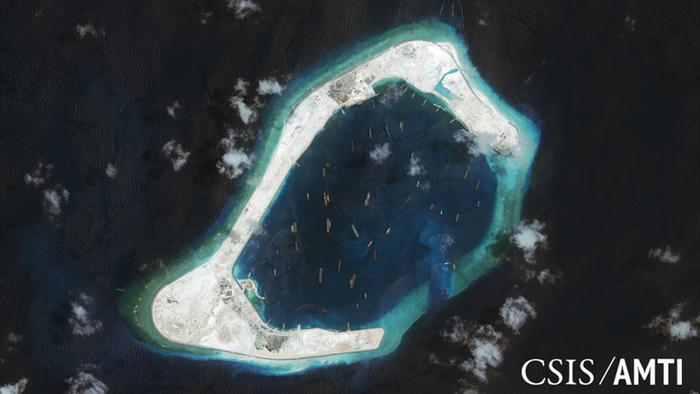 Following a meeting with Philippine President Benigno Aquino, on the sidelines of an Asia-Pacific summit on Wednesday, Obama said he looked forward to working with all claimants to the resource-rich waterway to resolve their disputes.

China claims most of the South China Sea, but Vietnam, Malaysia, Brunei, the Philippines and Taiwan have rival claims in the region.

Washington has repeatedly reiterated its commitment to freedom of navigation and flight in the area - a position that has put it in direct dispute with Beijing.

Just last week, the US received warnings from a Chinese air traffic controller after two American B-52 bombers flew "in the area" of the Spratley Islands in the South China Sea.

Shortly after arriving in Manila on Tuesday, Obama reaffirmed Washington's commitment to the defense and security of the Philippines, when he toured the BRP Gregorio del Pilar - a Philippine Navy warship once owned by the US.

The president also said the US will transfer two ships - a research vessel and a US Coast Guard cutter - to the Philippine Navy as part of its "ironclad commitment" to helping reinforce the Philippines' maritime security.

Obama was in Manila on Wednesday, to attend the two-day Asia-Pacific Economic Cooperation (APEC) summit, where the 21-member group hopes to promote trade.

In light of last Friday's deadly attacks in Paris, however, terrorism and a strategy to thwart the "Islamic State" (IS) militant group in the Middle East are likely to override much of the discussion.

Turkey, Philippines step up security ahead of major summits

The Philippines and Turkey have ramped up security ahead of two major summits bringing together world leaders this week. Organizers have said there are no known security threats. (14.11.2015)

US President Obama has blasted his opponents for fearing "widows and orphans" and has slammed domestic "hysteria" over risks posed by Syrian refugees. Meanwhile, Canada's refugee program has divided a nation. (18.11.2015)