US President Barack Obama has promised to stop "unacceptable practices" after a row over eavesdropping on French leaders. According to WikiLeaks, NSA spies monitored three French presidents between 2006 and 2012. 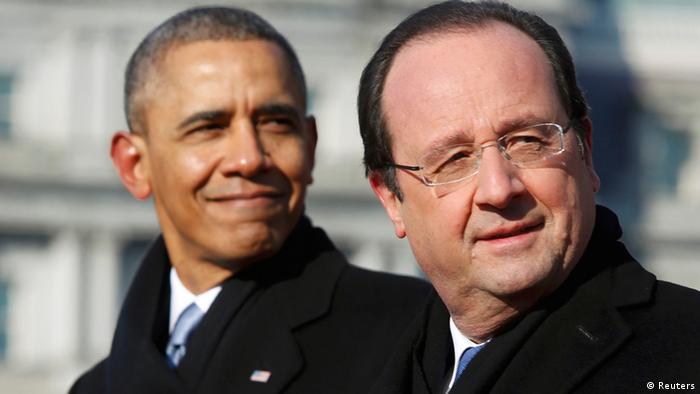 US President Barack Obama spoke with his French counterpart, Francois Hollande, on Wednesday after reports emerged that his government spied on French leaders, a statement from the French president's office said.

"President Obama reiterated unequivocally his firm commitment … to end the practices that may have happened in the past, and that are unacceptable among allies," the statement said.

The two presidents discussed "the principles that should govern relations between allies in the domain of intelligence."

French intelligence officials will visit Washington some time soon to discuss the matter, the statement added.

Obama made a similar pledge to Germany in 2013 after former CIA contractor Edward Snowden leaked confidential information about the extent of the US National Security Agency (NSA) surveillance. The documents showed that the NSA has tapped German Chancellor Angela Merkel's phone.

WikiLeaks published a series of documents late Tuesday, allegedly proving how NSA spied on the last three French presidents - Jacques Chirac, Nicolas Sarkozy and Hollande. WikiLeaks spokesman Kristinn Hrafnsson said he was confident that the documents were authentic, noting that WikiLeaks' disclosures had previously proven to be correct.

The revelations were first reported in the French daily newspaper "Liberation" and on the news website "Mediapart," which said the NSA had spied on the presidents from 2006 until May 2012 - the month when Hollande took over from Sarkozy. The documents allegedly contain conversations intercepted by the NSA.

Earlier on Wednesday, Hollande said France "won't tolerate" security threats. The WikiLeaks reports reflect "unacceptable facts that have already arisen between the US and France," Hollande said in a statement.

"Commitments were made by the US authorities. They need to be recalled and strictly respected," e said, following an emergency meeting with his top security officials.

The French Foreign Ministry summoned the US ambassador to discuss the disclosures, diplomatic sources told the AFP news agency after Wednesday's meeting.