UN inspectors will have "less access" in Iran, but the International Atomic Energy Agency will still be able to carry out inspections — at least for the next three months. 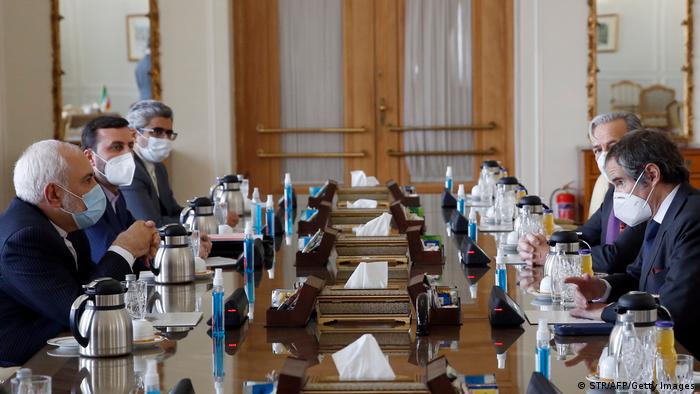 Tehran in December 2020 passed a law that would curb access for IAEA inspectors, if European signatories "do not fulfill their obligations" to a 2015 Iran nuclear deal by February 21. The law is due to go into effect on Tuesday.

Tehran also hoped to pressure the US to lift sanctions and re-commit to the 2015 multinational nuclear deal — formally known as the Joint Comprehensive Plan of Action (JCPOA).

What did the UN watchdog and Iran agree on?

The IAEA and Iran reached a "technical solution," said IAEA chief Rafael Grossi on return from emergency talks in Tehran.

As part of the deal, the IAEA will "retain the necessary degree of monitoring and verification" in Iran, Grossi added.

The number of inspectors on the ground would remain the same but the types of activities they can carry out will change, said Grossi. He did not give further details.

He stressed monitoring would continue "in a satisfactory manner.''

The solution will remain in place for up to three months.

Iran's Foreign Minister Mohammad Javad Zarif told Iranian state television on Sunday ahead of his meeting with Grossi that the IAEA would be prevented from accessing footage from their cameras at nuclear sites.

Is the solution a success?

"The hope of the IAEA has been to stabilize a situation which was very unstable," Grossi said at the airport after his arrival back in Vienna, where the agency is based.

"It salvages this situation now, but, of course, for a stable, sustainable situation there will have to be a political negotiation and that is not up to me," Grossi explained.

But the reduced monitoring helped "avoid a situation in which we would have been, in practical terms, flying blind," Grossi added.

Why did Iran want to stop UN watchdog visits?

The US in 2018, under the Trump administration, took a hard line against Iran. It pulled out of the 2015 nuclear pact and reinstated sanctions. These have badly hurt Iran's economy.

In response, Iran has been breaking key limits on uranium enrichment and uranium metal laid out in the 2015 deal. It wants sanctions lifted and a return to the terms of the pact.

Newly-elected US President Joe Biden recently called for European powers to come together and curb Iran's "destabilizing" activities. Biden made a commitment to rejoin talks on Iran's nuclear program.

IAEA chief arrives in Iran ahead of sanctions deadline

UN nuclear watchdog head Rafael Grossi arrived late Saturday in Iran for talks on the eve of Tehran's deadline for US sanctions to be lifted.