Foster stepping down has the potential to trigger a snap election. The province's power-sharing executive is at risk of falling apart. 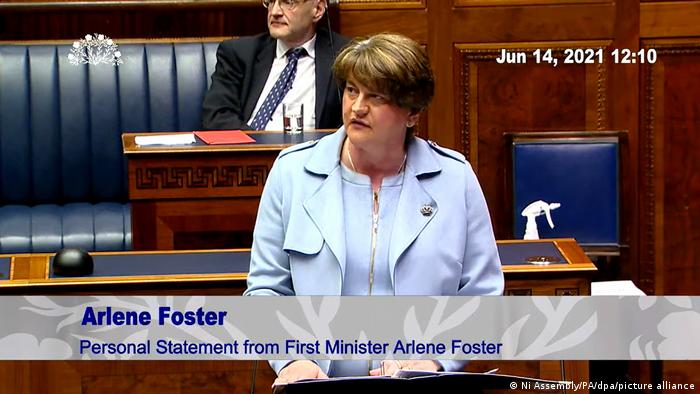 Arlene Foster formally stepped down as Northern Ireland's first minister on Monday, adding to the instability in the province where uncertainty reigns over post-Brexit trading arrangements.

However, if the nationalist Sinn Fein party declines to nominate a deputy first minister, then the region's executive will disintegrate, and a snap election could follow.

Sinn Fein have insisted that the nomination for first minister and deputy first minister must be accompanied by the implementation of the cultural elements of the New Decade, New Approach (NDNA) deal which restored the power-sharing executive last year.

The NDNA includes protections for the Irish and Ulster Scots languages.

But the new leader of the DUP, Edwin Poots, told BBC Radio Ulster that though he was "committed to all aspects of NDNA," the Irish language provision would not be a prerequisite when choosing a first minister.

Outgoing Foster called for cool heads to prevail but warned that "politics in Northern Ireland, between the UK and Ireland, and the UK and the EU, is out of balance, an imbalance created by the protocol."

Foster said the protocol, which since the turn of the year has effectively kept Northern Ireland in the EU customs union and single market for goods, "is not a real partnership."

"An imbalance and an instability is built in, that will fester and deteriorate," she said.

"Imbalance and instability in the context of Northern Ireland is a truly dangerous cocktail."

Foster, who took power in 2016, was ousted from the DUP in April after a majority of its lawmakers blamed her for mishandling Brexit negotiations.

The visit has not been without controversy, with opposition parties suggesting the British prime minister should not be entertaining someone like Orban, whom they view as anti-democratic.