North Macedonia holds first election since changing its name | Europe | News and current affairs from around the continent | DW | 14.07.2020

After a three-month delay due to coronavirus, North Macedonia is holding crucial elections on Wednesday. Voters must decide between the government's international stance or the opposition's 'lost identity' narrative. 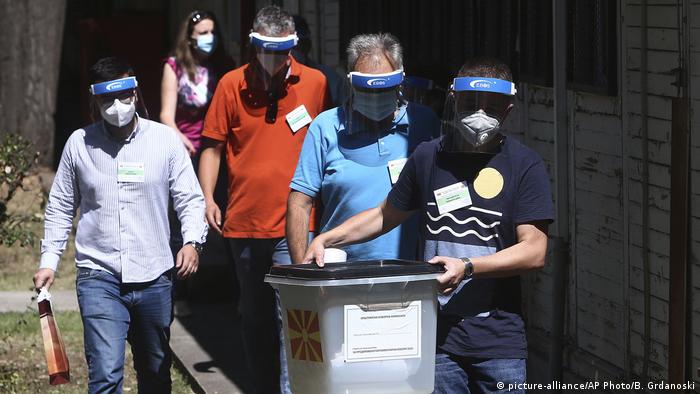 Vote or stay home? The alarming rate of new coronavirus infections in North Macedonia is confronting many voters with a dilemma in in the general election on Wednesday. This may well prove crucial in the outcome of the ninth parliamentary elections since the Balkan republic of 2 million people declared its independence from Yugoslavia in 1991.

In a country much changed, not least in name, since Zoran Zaev's Social Democrats took power in May 2017, people in North Macedonia now have to choose between continuing on the same path that brought them NATO membership and the prospect of EU accession or following the nationalistic "lost identity" narrative of the main opposition party, the national conservative VMRO-DPMNE.

In October, after the European Union failed to open membership talks despite North Macedonia's changing its name to appease Greece's government, Zaev called for early elections, initially scheduled for April 12. Ultimately, however, the compromise did bring some political gratification to the government, with North Macedonia becoming the 30th member of NATO. Moreover, the EU changed its position in late March and agreed to allow accession talks to begin.

Although the European Commission described North Macedonia as in a condition of "state capture" under a decade of VMRO-DPMNE rule, the Social Democrats have managed to fulfill a reformist agenda despite persistent problems with the rule of law and endemic corruption. Will that be enough to grant Zaev another four year term? 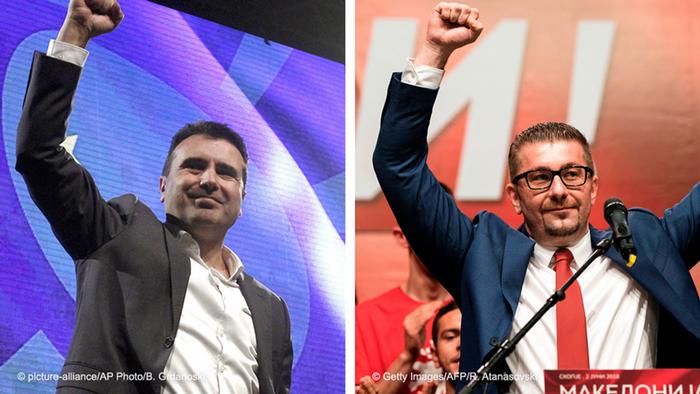 The election outcome is set to have a huge bearing on North Macedonia's political path, with recent polls suggesting that the result is too close to predict.

Read more: What's in compromise between North Macedonia and Greece?

"These elections may be a turning point in North Macedonia's future," the political analyst Petar Arsovski told DW. "Ultimately, the choice boils down to whether the country stays on the track it chose a couple of years ago," he said. "The result of the ballot will also determine whether the name deal with Greece and the current Euro-Atlantic integration momentum survives."

Hristijan Mickoski and the VMRO-DPMNE criticize the concessions that Zaev has made to Greece and Bulgaria by signing bilateral agreements that opened the path to both NATO and the EU. Ignoring the new name, Republic of North Macedonia, and using the historical Macedonia during the election campaign, Mickoski is mainly appealing to a nationalist sense of injustice and is pledging that he and his party would reverse the agreements that endanger the identity.

In November, German Foreign Minister Heiko Maas told DW that he "couldn't even imagine someone wanting to destroy" the international agreements reached and "intentionally lead North Macedonia up a dead end."

Running for the first time with an ethnic Albanian political party as part of their election coalition, the Social Democrats say a vote for the opposition would mean a return to "the dark ages."

Many EU politicians seem to share this fear and have decided to give public backing to the Social Democrats during the campaign — including German Deputy Minister for Europe Michael Roth and Luxembourg's foreign minister, Jean Asselborn. Hungary's prime minister, Viktor Orban, is the only EU leader to have openly endorsed VMRO-DPMNE during the campaign.

The coronavirus pandemic has overshadowed the elections, with leading parties focusing on TV ads, social media and small rallies while blaming their opponents for the growing outbreak. North Macedonia is the third country in the region to hold parliamentary elections during the pandemic, after both Croatia and Serbia witnessed the lowest voter turnout in recent history.

Data from the European Centre for Disease Prevention and Control puts North Macedonia among the top five European countries with the highest total of coronavirus cases per 100,000 inhabitants during June. While infection numbers in the first two weeks of July have been declining, they are still more than four times higher than the average in EU countries. Politicians and health experts alike are struggling to convince citizens that it is safe to vote.

But casting a ballot is not the only tricky issue. "For me the risk when you enter a shopping mall is far greater than going to a polling station," epidemiologist Aleksandar Stojanov told DW. "But the problem is what happens before and after voting. Will there be celebrations, protests, mass gatherings of any kind?"

Ana Kimovska-Georgievska, a 33-year-old economist from the capital, Skopje, is also skeptical. "I'm not voting because I'm not convinced it is going to be safe," she told DW. Currently pregnant with her second child, Kimovska-Georgievska said she had voted in every election since she was 18, but this time she would pass. "They all say: ‘Don't worry it's safe,'" she said. "But can I be really sure that the people in the election commission know what they are doing?"

A recent poll conducted by the National Democratic Institute shows a growing percentage of citizens deciding not to vote. Political analyst Arsovski said turnout would be down, owing to fears of the pandemic and to voter apathy. "The decrease in turnout will not be dramatic, however," he said, "and definitely won't influence the legitimacy of the elections."

French President Emmanuel Macron has been skeptical over the two nations' hopes to join the bloc. Icy relations between North Macedonia and Greece have thawed since the former agreed to add 'North' to its name. (15.11.2019)

The naming dispute between Greece and North Macedonia has roots that go back to antiquity. The country's borders have moved about a bit over time, while ethnic changes have also made a mark. (04.02.2018)