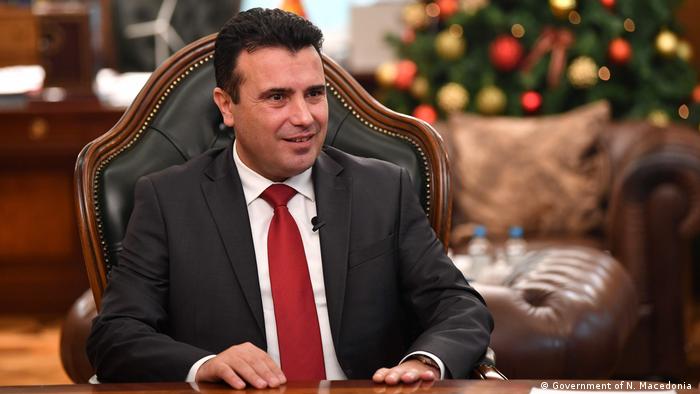 For more than two decades Macedonia was entangled in a name dispute with neighboring Greece that blocked its EU and NATO integration. At the beginning of next year, the country of 2 million people that now officially calls itself North Macedonia will become the 30th NATO member, but its hopes for faster integration into the European Union suffered a heavy blow at the EU's Brussels summit in October after France vetoed both North Macedonia and its Balkan neighbor Albania. French President Emmanuel Macron asked for a delay in the enlargement and insists that the methodology of the negotiations process should first be reformed before starting negotiations with new candidate countries.

After the summit "I was broken and crushed," Zoran Zaev says, talking to DW from his office in Skopje. Zaev, together with former Greek Prime Minister Alexis Tsipras, orchestrated the Prespa Agreement, which put an end to the name dispute and was praised by many as a positive example in the volatile region. Many European leaders, including German Chancellor Angela Merkel, promised Zaev that the doors to the EU should open once he solved the dispute.

"The whole narrative at that time was filled with superlatives towards us. We were the best example in Southeast Europe, with world leaders starting and ending speeches with the Prespa Treaty," Zaev says.

A lot to lose if nationalism returns

After the failure in Brussels, Zaev decided to call snap elections and keep the country on its path towards the EU. Zaev says he is aware that his country might not become a member of the EU in the next "five, seven or 10 years" but "we need the motivation to take the next step."

He is hoping that the new European Commission can go through the changes quickly enough to give his reformist government a chance to convince the voters not to look for alternatives, as Russia, China and Turkey are actively seeking to fill the vacuum left by the EU in the region. The elections will be held on April 12 next year and according to the latest polls, Zaev's Social Democrats are tied with the nationalist opposition led by VMRO-DPMNE.

"They say, 'we need time.' All right, but if nationalism and radicalism return here we will lose decades," he warns.

The future of the historic agreement with Greece could also fall victim to a potential change of power in North Macedonia. The main opposition party in the country has so far refused to use the new name and as VMRO-DPMNE leader Hristijan Mickovski recently told DW in an interview, he will try to annul the agreement.

"The opposition's threats to annul the agreement are a frivolous manipulation to collect points before the elections. It is a political adventure that can have serious and far-reaching consequences for the country," Zaev told DW.