Concerns about radiation and contamination are on the rise on the Korean Peninsula following the North Korean regime's nuclear tests. But claims made in this regard by North Korean refugees are hard to prove. 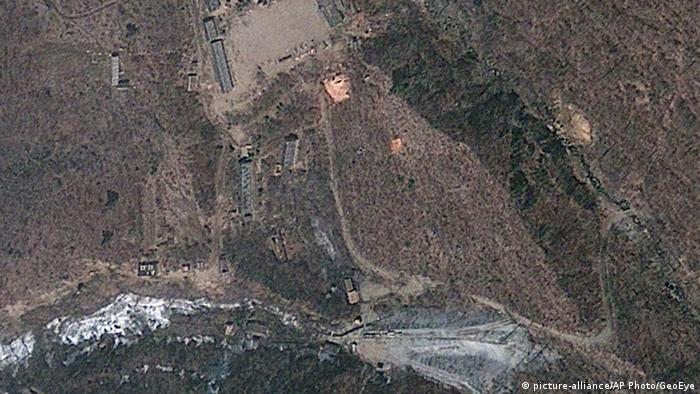 Lee Jeong-hwa's home county of Kilju is located in the mountainous northeastern part of North Korea. The region is home to the isolated East Asian nation's Punggye-ri nuclear test site, which she thought was an ordinary military base. She believed the trembling of the earth following the first two nuclear tests was a consequence of natural earthquakes.

"And then suddenly many people were contracting diseases that doctors were unable to diagnose," recollected Lee, who is in her mid-40s.

It's been seven years since Lee Jeong-hwa fled North Korea. Even though she is currently living in the South Korean capital Seoul, her hometown is not faraway from her thoughts. Lee suspects that her native region could have been contaminated by the North's nuclear tests.

Pyongyang's reclusive regime, led by the Kim dynasty, has conducted six nuclear tests since 2006. All these explosions were carried out at the same location in Punggye-ri site, whose tunnels extend up to two kilometers below the earth's surface.

The most recent test conducted by the North, in September, was that of a supposed hydrogen bomb, which marked a significant upgrade of the nation's nuclear program. With an explosive potential of possibly up to 200 kilotons, it was the most powerful device ever fired by Pyongyang. It triggered not only massive landslides on site, but also a quake of magnitude 6.1 on the Richter scale. Since then, concerns about nuclear contamination are on the rise.

Suh Kyun-ryul, professor of nuclear engineering at Seoul National University, believes the mountain structure in Punggye-ri has now been badly affected. "If the North Koreans continue to test similarly heavy nuclear bombs on the same site, sooner or later they will lead to a premature collapse, where radioactive material could reach and contaminate both the groundwater and the surface of the earth."

According to "Vision of North Korea," a South Korean NGO, the disaster may have already been here. In a multi-year investigation, they have collected testimonies from 21 North Korean refugees from the region. Their statements included the claims that many plants had unusually died, underground water sources had dried up and brown trout – once a regional specialty – had washed up dead in the nation's rivers.

But the most serious charge was that an increasing number of newborns from the affected area were suffering from deformities at birth. The NGO alleges that this was a consequence of radioactive radiation.

No proof to confirm

One of the interviewees is the 60-year-old Rhee Yeong-sil, who lived only a few kilometers away from the nuclear test area until her escape in 2013.

"We had more sick people than in other regions, and my whole family suffered from severe headaches and nausea, which did not respond to any medicine," said Rhee, adding that "many have died from leukemia, even young people." She noted that she knew of at least two acquaintances that gave birth to physically deformed children.

- South Korea to bring back US tactical nuclear missiles?

Such statements' veracity could not be verified. In fact, the health conditions mentioned in these allegations could also be explained as occurring due to the acute shortage of food and healthcare provisions in the country.

Experts such as Seoul National University's Suh Kyun-ryul regard the allegations leveled by North Korean refugees as plausible. "I do not believe that they are lying, but ultimately we have to rely on their mere words, as we have little reliable data available."

The fears of the North Korean refugees serve as a warning to the international community. South Korea's Ministry of Unification, meanwhile, has begun to conduct tests on some 30 North Korean refugees from the affected region to find out if they could detect any traces of increased radioactivity.

According to a ministry spokeswoman, the results of the investigations would be available shortly before the end of the year. And until then, she said, the ministry will not comment on the issue publicly.

The North Korean and US leaders have engaged in an escalating war of words in recent months. Tensions revolve around Pyongyang's developing missile and nuclear weapons programs. DW has the best quotes. (09.08.2017)