Many North Koreans swim across the Tumen River into China. These people then travel in secret, avoiding authorities, before they reach South East Asia. From there they go to South Korea to seek asylum. 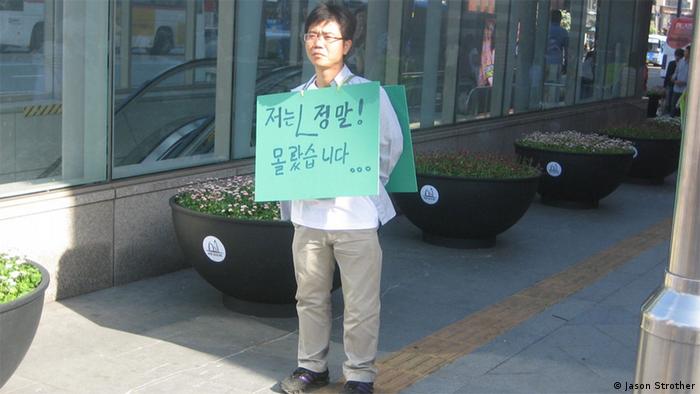 Every Saturday, Ji Seong-ho and other human rights activists protest at a busy intersection in the South Korean capital Seoul. He holds a banner that denounces the North Korean government for its human rights abuses.

Ji escaped from North Korea in 2006. But his journey was even more challenging than most refugees from the North.

"I used to help my family make money back in North Korea by stealing coal and selling it on the market," Ji tells DW. "I used to take it off moving trains. In 1996, when I was 15 years old, I had an accident. I was on the train and I became dizzy. I fell off and the train ran me over."

Ji lost both his left hand and left foot in that accident. North Korea's hospitals didn't have enough medicine, so his parents used salt water to clean his wounds. And the country was suffering continuous food shortages - yet his father gave him food, while his brother and sister went hungry. 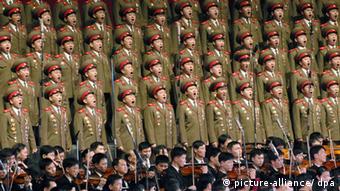 Even after he recovered, life wasn't much easier. "It was the year 2000 when some friends and I crossed the Tumen River into China to get food. I quickly saw that even animals there ate more rice than us. I felt really sad; my grandmother had died of starvation a few years earlier,” Ji says, adding that he had learnt about Kim Jong-Il's family and their luxurious lives.

"I decided then that someday I needed to escape North Korea for good," Ji says.

But Ji says that time had to wait, so he went back to his home across the border. But he didn't make it very far.

"I was on my way back from the Tumen River when some North Korean police officers came up to me. They saw that I had food and clothing from China, which was evidence that I had escaped. They took me to the police station and beat me for a week. They hit me even more than others. They told me I had brought shame on North Korea because I was disabled, and that a person with one leg should not leave his home."

Ji says that at that time he finally lost all trust in the North Korean government. Ji and his family plotted their escape. His mother and sister left first in 2004. Then he and his brother crossed the Tumen River two years later. He says the two of them made a difficult pact.

"We decided to split up, so that we wouldn't both get caught and sent back to North Korea. We pledged to meet once again in South Korea. For several months, I walked about 12 kilometers a day through China. I paid about $3,000 (2,400 euros) to smugglers to bring me to Southeast Asia, where I was put on a plane and made it to South Korea. When I finally got here, I felt a sense of accomplishment," Ji says.

Like all defectors who make it to South Korea, Ji was given free medical treatment. Ji says the doctors were amazed that he had managed to escape with only one leg.

"They said that of all the refuges that make it here, someone with such disabilities was rare to see. They gave me a good pair of crutches and later I received my prosthetic hand and foot. I feel I lead a normal life now."

All his family, except for his father who died while in North Korean custody, made it to South Korea and are reunited. Ji now studies law at a university in Seoul. He also began his own human rights group called Now Action and Unity for Human Rights. He also records a radio program carried by US-funded Radio Free Asia - it is broadcast into North Korea.

On his Radio Free Asia program, Ji talks about life in South Korea and that what he learned about history at school back home in the North was untrue. 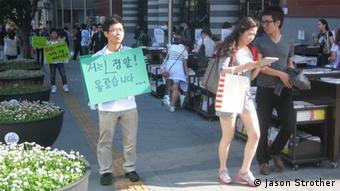 Many North Koreans want democratic rule in their country

Ji has rebuilt his life in South Korea but many other refugees from the North are not so successful. 23,000 Northern refugees now live in the South. Physical disabilities are not the only challenge they face.

Kion Won-hyoung is a psychiatrist at Hanawon, a government resettlement facility for recent North Korean defectors. Ji also stayed there when he first arrived.

"There are very few people with disabilities at Hanawon," Kion tells DW. "Some people might become disabled on the journey to get here, or from an unknown illness. But there are others who are injured, often as the result of torture. You frequently see marks on their bodies from being beaten. Many suffer from post traumatic stress disorder because of this," he says.

Kion says up to 30 percent of refugees show signs of this disorder. These psychological scars can be as deep as physical ones - some refugees are afraid of police officers, and others have nightmares. That makes it hard for them to adjust to life in the South.

But Ji says he likes it in South Korea - especially because of the way disabled people are treated there. He says they have access to job training programs and buildings with wheelchair entrances - something he could have never dreamed of in the North.

"I think as a country becomes more democratic and society receives better education, people with disabilities are treated better. For me, South Korea is really like heaven," Ji says.

He adds that he will have to wait for peace and reunification of the North and the South before he can go back to his homeland. But when that happens, he will be able to do it on two feet, he hopes.

North Korea's dictator Kim Jong Un has recently emphasized the importance on the economy and the lives of the North Korean people. That alone does not mean reform, says North Korea expert Daniel Pinkston. (03.08.2012)

Under its new leader, many wonder whether Pyongyang will make an attempt at improving relations with Seoul. But after the arrest of a senior citizen who travelled north illegally, relations remain tense. (13.07.2012)