Pyongyang said it wants a nuclear-free world, but a nuclear war might still start due to an "extreme and direct" US threat. Washington has separately hinted that it could be open to direct talks with the pariah regime. 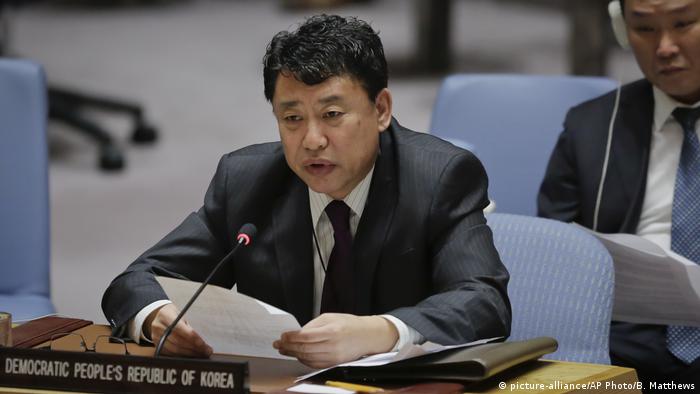 The situation on the Korean Peninsula "has reached a touch-and-go-point and nuclear war may break out at any moment," North Korean Deputy Ambassador Kim In Ryong told the UN General Assembly's disarmament committee on Monday.

"The entire US mainland is within our firing range and if the US dares to invade our sacred territory even an inch it will not escape our severe punishment in any part of the globe," he said.

While North Korea routinely exaggerates both the power and range of its nuclear arsenal, the isolated state has performed six nuclear tests since 2006 and its ballistic missiles are believed to be capable of reaching the US territory of Guam.

International efforts by the US, the EU, Russia and Pyongyang's closest ally China have yielded no progress in halting the country's nuclear arms program.

Kim In Ryong on Monday said that his country supports "the total elimination of nuclear weapons" globally.

But for as long as the US "constantly threatens and blackmails [Pyongyang] with nuclear weapons," North Korea cannot disarm, he said, addying that "no country in the world has been subjected to such an extreme and direct nuclear threat from the US for such a long time."

Kim In Ryong's remarks follows a statement by US Secretary of State Rex Tillerson in which he said that diplomatic efforts to diffuse the standoff between Pyongyang and Washington would continue "until the first bomb drops."

While Tillerson has been pushing for a diplomatic solution, other US officials appear to be taking a harder line. US President Donald Trump pledged in August to respond to North Korean threats with "fire and fury."

He later appeared to undermine Tillerson on Twitter after he wrote that the secretary of state was "wasting his time" by negotiating with North Korean leader Kim Jong Un. "Save your energy, Rex, we'll do what has to be done," he added.

'Direct talks' or preparing for the worst?

On Tuesday, Deputy Secretary of State John J. Sullivan hinted at the possibility of direct talks between North Korea and the US after a meeting with his Japanese counterpart, Shinsuke Sugiyama, in Tokyo.

While other countries including China have repeatedly called for talks, the US and Japan have been reluctant to negotiate as Pyongyang continues to pursue its nuclear and ballistic programs.

Sullivan said that the US is focusing on diplomacy to resolve the crisis. "Eventually, we don't rule out the possibility of course of direct talks," Sullivan said after meeting his Japanese counterpart in Tokyo.

"We must, however, with our allies, Japan and South Korea and elsewhere, be prepared for the worst should diplomacy fail," he said.

Sugiyama told reporters that Japan supported keeping all options open and the need for the US, Japan, and South Korea to work together on a diplomatic solution.