North Korea says US attitude in talks was 'extremely regrettable'

North Korea has accused the US of demanding unilateral denuclearization and said their attitude was "extremely regrettable." US Secretary of State Mike Pompeo had a different takeaway, saying the talks were "productive." 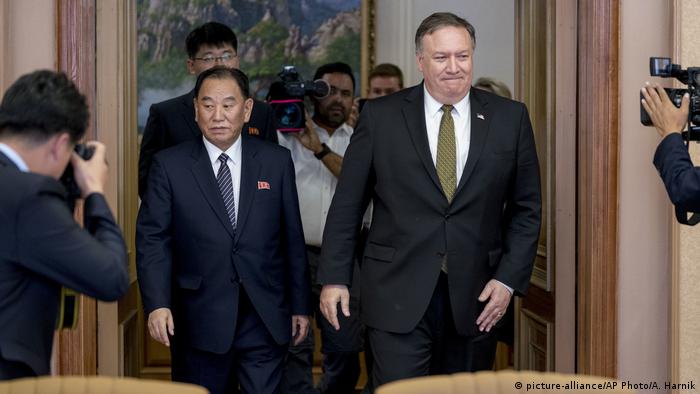 "The US attitude and positions at the high-level talks on Friday and Saturday were extremely regrettable," the North's Foreign Ministry said in a statement, reported the South's Yonhap news agency.

North Korea accused the US of trying to unilaterally force Pyongyang into abandoning its nuclear weapons. The talks with Pompeo were "very concerning" as they have led to a "dangerous phase that might rattle our willingness for denuclearization that had been firm."

Before departing Pyongyang on Saturday, Pompeo said the talks had been "productive," conducted "in good faith" and that "a great deal of progress" had been made in some areas.

Pompeo also said that US and Korean officials would meet on July 12 at the border between South and North Korea to discuss the destruction of Pyongyang's missile engine testing facility and the remains of US troops from the 1950-53 Korean War.

Following his historic meeting with Kim on June 12, Trump announced that the destruction of the missile facility was in progress of being completed.

But Pompeo said that more talks were needed to progress on this matter.

"We talked about what the modalities would look like for the destruction of that facility as well, and some progress there as well, and then we have laid out a path for further negotiation at the working level so the two teams can get together and continue these discussions," Pompeo said.

Pompeo's visit to North Korea came amid reports that US intelligence agencies had "evidence" that Pyongyang is continuing to expand its capabilities to produce weapons.

Some of the reports suggest that the Kim regime was expanding weapons production facilities even as it promised to start the denuclearization process in the run-up to the Kim-Trump meeting in Singapore.

A report published recently by NBC News, citing unnamed US officials, said US intelligence agencies "believe North Korea has increased production of fuel for nuclear weapons at multiple secret sites in recent months and may try to hide these while seeking concessions in talks with the United States."

Another US official was quoted saying there is "absolutely unequivocal evidence" that North Korea was trying to "deceive" the US.

"The intelligence community assessment that North Korea is taking steps to deceive the United States would be consistent with regime behavior during all previous diplomatic negotiations," Bruce Klinger, a former CIA division chief for Korea and senior research fellow for Northeast Asia at the Heritage Foundation in Washington, told DW.

However, Klinger emphasized that expanding production of fissile material did not violate the US-North Korea joint declaration signed in Singapore. "No real denuclearization agreement has yet been reached," he said.

"As the US seeks to put meat on the meager bones of the Singapore Communique, it needs to emulate the lengthy, detailed treaty text and robust verification regimes of arms control treaties with the Soviet Union rather than the flawed North Korean agreements of the past," added Klinger.

Despite positive rhetoric from the Trump administration, intelligence reports and image analysis indicating an increase in weapons production provide a reminder of the difficult path ahead in disarming North Korea. (04.07.2018)

How North Korea went from threatening the US with nuclear war to seeking diplomatic talks with President Donald Trump. (12.06.2018)