North Korea has been ramping up its weapons tests this year, defying sanctions and prompting warnings that Pyongyang could be preparing to resume nuclear tests. Seoul, the US and Japan have condemned the latest launch. 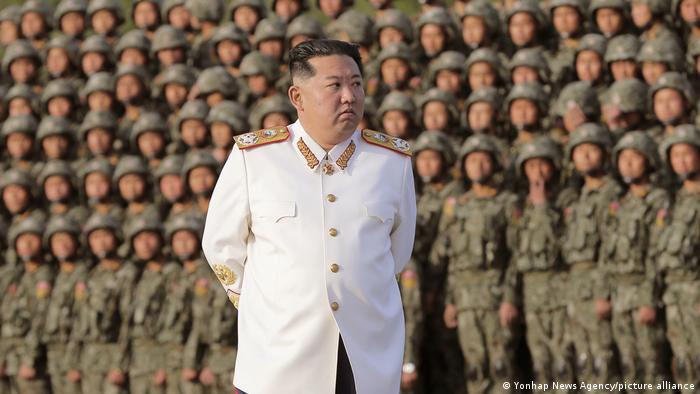 North Korea fired a ballistic missile into the waters off its eastern coast on Wednesday, South Korea's military said.

Japan also confirmed the weapons test, with the country's Coast Guard urging vessels to steer clear of any potential fragments.

In a statement following the launch, South Korea's Joint Chiefs of Staff said that the missile was fired from the Sunan area of the North's Pyongyang region.

Sunan is where North Korea last fired what it claimed to be Hwasong-17, a "new type" of intercontinental ballistic missile (ICBM), on March 24.

"Our military is maintaining readiness posture while closely monitoring related activities for possible additional launches," the South Korean military said in its statement.

The United States also condemned the test and reiterated calls for Pyongyang to return to the negotiating table over its nuclear and missile programs.

"Like the DPRK's recent tests of at least three intercontinental ballistic missiles, this launch is a clear violation of multiple United Nations Security Council resolutions," a State Department spokesperson said, referring to the North by the initials of its official name.

The US military called on Pyongyang to refrain from further destabilizing actions. "While we have assessed that this event does not pose an immediate threat to US personnel, territory, or that of our allies, we will continue to monitor the situation," it said in a statement.

North Korea 'one step closer to hitting the US': political scientist Darcie Draudt

Japanese Prime Minister Fumio Kishida, who met with Pope Francis at the Vatican on Wednesday, said actions from the North that "threaten the peace, safety and stability of the international community are impermissible."

A statement from the Vatican said Kishida held talks with the pope and top Vatican officials about the need for "a world free of nuclear weapons.''

"We must continue showing ourselves united and resolute to defend the international order based on rules, including in the China Sea and Straits," Draghi said.

North Korea has carried out 14 missile tests this year, including a suspected intercontinental missile launch in late March. Wednesday's launch comes a week after the North vowed to develop its nuclear forces "at the fastest possible speed."

In March, North Korea resumed long-range missile launches for the first time since 2017. Officials in Seoul and Washington have said Pyongyang could be preparing for nuclear tests as well.

Some observers have said North Korean leader Kim Jong Un wants to use his expanded arsenal to win international recognition of North Korea as a nuclear state and that he believes such a move would pressure the United States to relax international economic sanctions on Pyongyang.