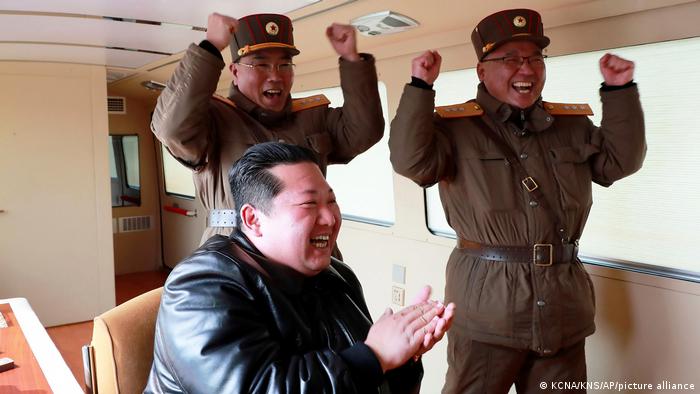 Kim made the remarks during a military parade on Monday in Pyongyang to celebrate the founding anniversary of the North Korean armed forces.

"We will continue to take steps to strengthen and develop our nation's nuclear capabilities at the fastest pace," Kim said, according to KCNA.

"The nuclear force of the Republic must be ready to exercise its responsible mission and unique deterrence anytime," Kim told the parade, according to KCNA.

North Korea 'one step closer to hitting the US': political scientist Darcie Draudt

What we know about the military parade

NK News, a Seoul-based website that focuses on the news from North Korea, reported that several illuminated objects were spotted over central Pyongyang at around 9:30 p.m. (12:30 GMT) Monday night.

NK News says it could either be drones or other aircraft.

North Korea has conducted three of its previous military parades after dark and media outlets have not reported on the parade until the next day.

The military parade, which began Monday evening to mark the 90th anniversary of the armed forces, reportedly featured the North's largest intercontinental ballistic missile (ICBM), the Hwasong-17, according to KCNA.

US and South Korean analysts, however, have cast doubt on Pyongyang's claims that it tested the "monster missile" in March. North Korea claimed to have tested the Hwasong-17 on March 24, raising fears that Pyongyang was once again getting ready to test full-range ICBMs.

The last time the North fired a ICBM was in 2017. But, South Korean military officials later debunked Pyongyang's claim of having fired a the more powerful ICBM in March, saying the North launched the smaller Hwasong-15 ICBM that it tested in 2017.

Tensions with the US, UN

The United States in March imposed sanctions on several entities and individuals in North Korea, as well as allies Russia and China in light of repeated missile tests.

US officials had warned that North Korea was getting ready for full-range missile tests after the North conducted at least two tests in February and at the beginning of March.

Experts have also warned that Kim Jong Un is exploiting a favorable environment and pushing ahead with its weapons program since powerful bodies like the United Nations remains occupied — and divided — on the Ukraine conflict.

The UN Security Council issued a statement on March 8 to condemn the North's repeated tests. While the US has been pushing for tougher sanctions on Pyongyang, China and Russia have resisted — calling instead for measures to be eased.

North Korea remains under international sanctions. Talks to lift sanctions in exchange for closing some of the North's nuclear programs have remained stalled since 2019, when a historic summit between Kim Jong Un and former US President Donald Trump broke down in the Vietnamese capital city of Hanoi.