High-ranking members of both governments met in a village on the border to plan upcoming talks between the two countries' leaders. The meeting will be the first of its kind in over a decade. 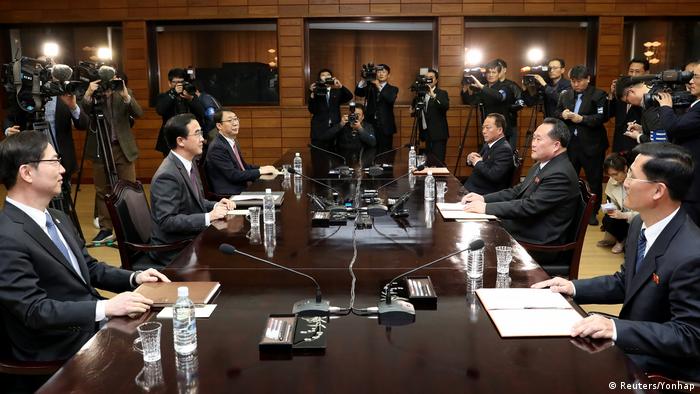 Top-level officials from North and South Korea met near the border to prepare for an upcoming summit between the leaders of the two countries, the South confirmed on Thursday. The officials were discussing the details and possible dates for the inter-Korea talks.

Ri, who heads Pyongyang's agency in charge of inter-Korean ties, also said he hoped for an outcome that matches the "hope and desire of the nation."

South Korea's unification minister, Cho Myoung-gyon, responded that officials should do their best to set up a successful meeting, adding that the "current situation was created by decisions from the highest leaders of the North and South."

Set for April 27, the meeting between North Korean leader Kim Jong Un and South Korean President Moon Jae-in will only be the third of its kind since the end of the Korean War, the last of which came in 2007. The steps towards rapprochement signal a significant thawing of tensions that began at the Winter Olympics in Pyeongchang in February.

Kim has also reportedly agreed to a sit-down with US President Donald Trump at some point in the near future.

According to Seoul, Kim has signaled his desire to "denuclearize" the peninsula, but some observers worry that Pyongyang is adopting a "divide and conquer" strategy by meeting each party separately.

Earlier this week, Kim made a surprise visit to Beijing — his first trip abroad since assuming power in 2011, seen as an effort to coordinate responses to the upcoming summits.  Chinese State Councilor Yang Jiechi is set to travel to Seoul this week to brief the South Korean government on the meeting between Kim and Chinese Premier Xi Jinping.