The Nobel Committee sees the continued imprisonment of Liu Xiaobo as a sign of weakness, despite all of China's strength. Meanwhile, Chinese pressure seems to have galvanized Western democracies. 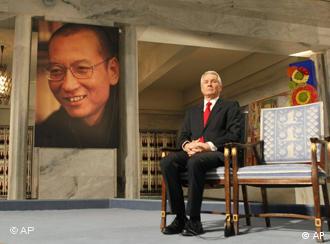 It will forever remain the symbol of this year's Nobel Peace Prize ceremony in Oslo. As dignitaries from around the world stood and applauded, Norwegian Nobel Committee chairman Thorbjoern Jagland placed the blue clad Nobel diploma on the empty chair, where Liu Xiaobo would have sat.

Liu, a 54-year-old literary critic and democracy advocate, is serving an 11-year prison sentence for subversion, handed down last year after he co-authored a bold appeal for human rights and political reform.

In his speech at the ceremony, Jagland noted Liu's imprisonment and regretted that he was not present to receive the award. "This fact alone shows that the award was necessary and appropriate," Jagland said. He added that despite all of China's economic strength, its weakness was manifested "in the need to imprison a man for 11 years merely for expressing his opinions on how his country should be governed." 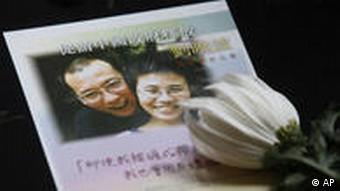 Liu Xiaobo had told his wife that he would like this year’s Peace Prize to be dedicated to "the lost souls from June 4". He was referring to the many activists who died during the firing by government troops on the Tiananmen square in Beijing.

The Nobel Committee has accepted his wish.

Jagland also said that, although none of the Committee’s members had ever met Liu, "we feel that we know him. We have studied him closely over a long period of time".

While China had successfully pressured more than a dozen countries not to attend the ceremony to honor Liu Xiaobo, it seemed in Oslo that its efforts also backfired in a way. After all, it was the Chinese government's pressure which transformed Liu into a cause celebre among global rights activists. 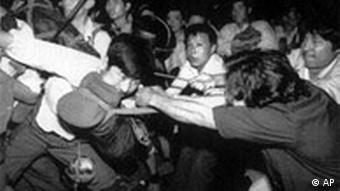 Moreover, the pressure felt in Oslo even hours before the ceremony, seemed to be galvanizing the West, reminding citizens of democracies of the values the Nobel peace prize stands for.

The Nobel Committee chairman emphasized that the Committee’s intention had been to make a statement about the relationship between human rights, democracy and peace. The rights democracies around the world enjoyed today were fought for and won by people who took great risks. "They did so for others. That is why Liu Xiaobo deserves our support," Jagland said.

Pictures of the Nobel Peace Prize 2010 ceremony held in Oslo.