Serbia had initially caved in to Chinese pressure to boycott the Nobel Peace Prize ceremony in Oslo, but sharp criticism by the European Union forced it to rethink its position - not least due to its own EU ambitions. 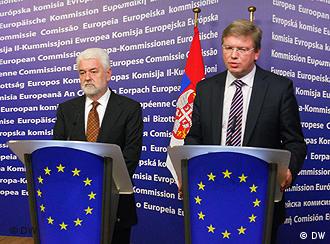 Standing alongside Serb Prime Minister Mirko Cvetkovic, he said that the EU "regrets the decision of Serbia not to attend" the ceremony and added that Serbia was "expected to embrace euro values and coordinate" with partners.

His words had a deep impact: While the foreign minister of Serbia had originally defended the country's decision not to attend the ceremony, Serbia decided to send its ombudsman for human rights, Sasa Jankovic, to Oslo.

Serbia was the only EU candidate that originally decided to stay away from the ceremony honoring Chinese human rights activist Liu Xiaobo. 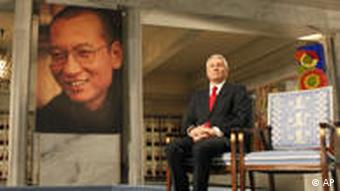 After the announcement of this year's laureate, China had protested against the Nobel committee's decision and had urged other countries to boycott the ceremony. Serbia followed China's call, as it relies on Chinese government support for Serbia's opposition to an independent Kosovo.

Caught between a rock and a hard place

But Serbia is caught in a clash of interests, because it wants to join the 27-nation bloc of the European Union. Fuele and other EU representatives clarified that Serbia needed to comply with the joint decision of EU member states to send representatives to Oslo in order not to lessen its chances of becoming a member state.

Pedrag Simic, political scientist at the University of Belgrad says that despite Serbia's goal to join the European Union, the country would still rely on four pillars of international politics - Brussels, Washington, Moscow, and Peking. "A small country can only follow one superpower," he said.

Simic added that Serbia's attempts to be loyal to both China and the European Union had to result in a dilemma such as the current one at some point.

The Nobel Peace Prize is being awarded this year to Chinese dissident Liu Xiaobo. But guests have gathered around an empty chair to congratulate the laureate, who will not be represented at the ceremony. (10.12.2010)

Tienchi Martin-Liao, president of the Independent Chinese PEN Center, a position that Liu Xiaobo has also held, has her own thoughts. (09.12.2010)

Human rights group Amnesty International organized demonstrations at the Chinese embassy in Oslo on Thursday, as China stepped up its criticism a day ahead of a ceremony honoring jailed dissident Liu Xiaobo. (09.12.2010)