The Nobel Peace Prize has been awarded this year to Chinese dissident Liu Xiaobo. But guests gathered around an empty chair to congratulate the laureate, who was not represented at the ceremony. 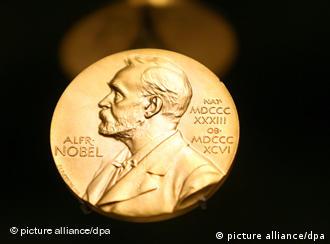 Another explosive choice for the Nobel Peace Prize

The Nobel Peace Prize committee has concluded its award ceremony in Oslo with the prizewinner and guest of honor, imprisoned Chinese dissident Liu Xiaobo, absent.

The prize was meant to "point out the relationship between human rights, democracy and peace", Nobel Peace Prize committee chairman Thorbjoern Jagland said in his opening comments. He called Liu a symbol of the "non-violent struggle for such [human] rights in China", and compared him with Nelson Mandela.

He went on to say that Liu had done nothing but exercise his civil rights, and called on China to release him.

In his absence, Norwegian actress Liv Ullmann read a final statement titled "I Have No Enemies" released by Liu's supporters after his sentencing a year ago.

In it, Liu said "there is no force that can put an end to the human quest for freedom, and China will in the end become a nation ruled by law, where human rights reign supreme."

He also spoke of his wife, Liu Xia, who is now under house arrest in Beijing, saying her love "is the sunlight that leaps over high walls and penetrates the iron bars of my prison window." 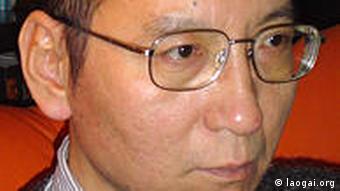 Liu Xiaobo is considered a criminal by the Chinese authorities

Throughout Friday, Western governments paid tribute to Liu's contribution to democracy and human rights, calling on China to release the dissident from prison.

"The participation of Germany as well as all EU partners represented in Oslo and many other countries in the ceremony in Oslo is therefore a simple sign of respect for Liu Xiaobo and for all who work to promote human rights and democracy without resorting to violence," a statement from Loening on the German Foreign Ministry website said.

United States President Barack Obama meanwhile hailed Liu as a beacon of freedom: "The values he espouses are universal, his struggle is peaceful, and he should be released as soon as possible," Obama said.

The event in the Norwegian capital was overshadowed not only by Liu's absence, but also by China's wider anger at his selection. Several nations decided to boycott the ceremony at Beijing's request after the Chinese government condemned the decision to award the prize to the democracy activist.

Almost a third of the 50 countries invited to the event stayed away, including Russia, Pakistan and Saudi Arabia. Many of those not attending are thought to have bowed to Chinese pressure.

Serbia, which was heavily criticized by the European Union for its initial decision not to attend, decided at the last minute to send an ombudsman after all. 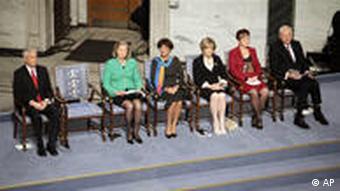 An empty chair represented Liu at the ceremony

Official Chinese media have slammed the choice of Liu as Nobel Peace Prize laureate, calling it an attempt to impose foreign values on China.

Liu has been a critic of the Chinese government since the Tiananmen Square massacre of 1989. Liu took a prominent part in the protests there and was sentenced to two years in prison.

He was jailed last December for 11 years on subversion charges after he co-authored a document called Charter 08, which calls for political reform in China.

Authorities have also cracked down on activists in the run-up to the ceremony and have prevented Liu's family and friends from attending.

The Nobel committee chose to represent Liu with an empty chair during the ceremony, calling this a symbol of the Chinese policy to isolate and repress dissidents. In a moving gesture, Jagland placed the Nobel diploma on the vacant seat.

It is the first time that a laureate under detention has not been formally represented since 1935, when Nazi Germany stopped the pacifist Carl von Ossietzky from attending. It is also the first time since then that the prize money of 1.13 million euros ($1.5 million) will not be handed out.