No Solution Other Than Police Presence for Unruly Berlin School | Germany | News and in-depth reporting from Berlin and beyond | DW | 01.04.2006

Police have stepped in at a Berlin school to help control violence that teachers say is out of control. Berlin’s education senator is coming under heavy criticism for refusing to close the secondary school down. 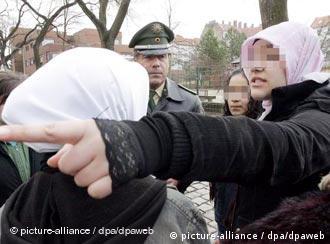 The Rütli school in Berlin is now under police protection

The Rütli school is located in the Berlin suburb of Neukölln, an ethnically diverse, low-rent district where unemployment is high. Teachers say more violence goes on here than learning, while politicians blame the violent behavior on the lack of opportunities for pupils in education and the employment sector.

"It feels as though we're raising criminals and terrorists here," said one former teacher in a recent interview with Berlin daily Der Tagesspiegel.

But everyone seems to agree on one point -- it's not necessarily the students' own fault.

"You don't stand a chance with a diploma from here. No one wants us. They just say we're foreign scum," said one student.

To counter the growing problems, social workers and school psychologists have been brought in to help the Rütli school cope, while police are to check that nobody brings weapons onto the property.

A cry for help

This is Berlin education senator, Klaus Böger's response to calls from teachers at the school to close it down, due to violence that they say is escalating out of control. He's coming under heavy criticism for taking a month to respond to a letter from the school principal asking for help.

"We are desperate," the teachers said in their letter. "Our teaching is met with flat rejection. The mood in the classroom is one of aggression, complete lack of respect and ignorance. Instructions are ignored. Few students bring relevant material. Many of us will only enter a lesson with a cell-phone in order to call for help when necessary." 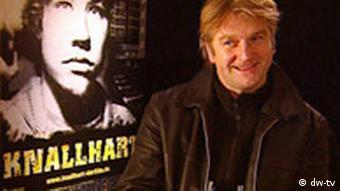 A neighborhood with the most foreigners and the highest unemployment level in Berlin, Neukölln recently served as the backdrop to the grittily realistic movie "Tough Enough" directed by Detlev Buck, which won critical acclaim for its unflinching depiction of inner-city ganglands when it premiered at the Berlin film festival in February.

With many pupils from Turkey or Arab countries, 80% of pupils at the Rütli school don't speak German at home. According to principal Brigitte Pick -- who has been on sick leave for the last six months -- Neukölln has become a ghetto. She warned of the potential escalation months ago.

"I say more and more often that the district is the problem," she said. "I really hope not, but I have this feeling, because you can’t send young people of around 20 years old into a situation where they have no prospects."

Mayor of Neukölln Heinz Buschkovsky thinks the problem needs to be addressed with a new public policy. 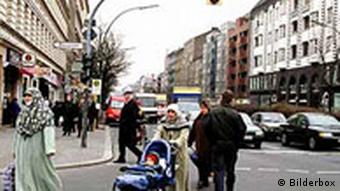 Neukölln is an increasingly troubled neighborhood

"At some point, we have to look at our society seismograph," he said. "That is educators, teachers, police, social workers: at some point we have to take this seriously, and turn it into a public policy. As for the question: fine, but who will pay for all this? - Well, I’m sorry but who's paying for the outcome now? Do you know how much a day in prison costs?"

The Berlin senate's Integration and Migration Commissioner Gunter Peining says the problem needs to be addressed at a federal level. He’s calling for a law to be introduced improving the residency rights of immigrants who are tolerated here in Germany.

Weeding out the worst

Meanwhile, the GEW Union for Education and Science has called for an end to Germany's three-tiered school system. While the best students graduate to high-school after grade 6, under-achievers are sifted off and sent to less academic secondary schools. "These are considered schools for losers," said Norbert Gundacker from the GEW. "Violence in these schools is nothing new. The kids here have never learnt that violence isn't always the solution." 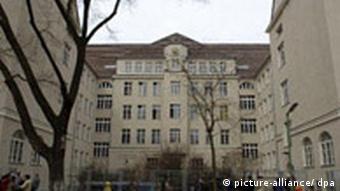 Tempers are fraying at the Rütli school

Criminologist Christian Pfeiffer agreed, telling Reuters that a reform of the school system was long overdue. "Children at these secondary schools have very little chance of being admitted into training schemes once they leave," said the director of the Criminal Research Institute in Hanover.

These opinions echo what the Rütli teachers have known all along. "What is the point of collecting in one school students who lack all perspective, whether it's supplied by their parents or the economy, when it comes to making the most of their lives?" their letter read.

The latest PISA educational study results released in Germany Thursday, confirmed what had already been suspected for long: the success of children at school is closely linked to their social status. (Nov. 4, 2005)

On Thursday, ministers will present their own findings into the state of Germany's education system. It is hoped that the report will show improvements in problem areas identified by consecutive damning studies. (July 14, 2005)

The UN believes Germany has a human rights problem -- at least where its schools are concerned. An envoy is on a fact-finding mission this week to explore shortcomings in educational equality. (Feb. 13, 2006)