Russian President Vladimir Putin believes war between Russia and Ukraine to be "impossible." The head of the Kremlin also rejected the claims of Russian support for rebels in Ukraine in a major TV address. 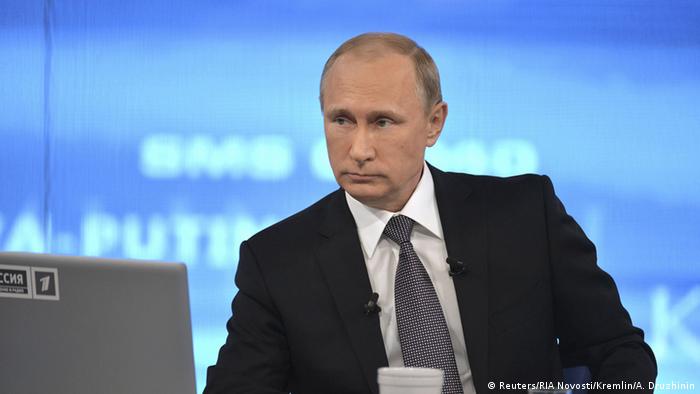 "On the question whether or not our military is in Ukraine, I am telling to you directly and clearly: there are no Russian troops," Vladimir Putin said during a televised call-in show with the nation on Thursday.

While answering screened questions by journalists and the public, Putin also said he assumed that war between the two countries was "impossible," telling a caller from a border region to "live in peace."

Putin acknowledged that there have been incidents along the frontier, but added that they were most likely accidental.

President Putin also accused the government in Ukraine of violating its obligations under the Minsk peace deal by imposing an economic blockade on pro-Russian regions.

According to the Russian president, Kyiv hasn't delivered pensions and other social security payments to people in the east, and has cut financial services in the area.

"There are people who fight for their rights by force ... but there are also people who have nothing to do with it, who have worked for their pensions ... So why are you not paying them?" he asked.

"Thus we can say that today's authorities in Ukraine are cutting off Donbass with their own hands," Putin said.

Refund for Mistral if deal's off

The president of Russia also stated that his country has no imperial ambitions and no intention of waging war. However, it would continue to strengthen its defense capacities, Putin said.

He also added that Paris' decision not to deliver two Mistral-class helicopter carriers would not affect the country's defense. One of the two vessels was due for delivery late last year, but France suspended the contract indefinitely in response to developments in Ukraine; Putin said he would expect reimbursement if the deal collapsed altogether.

"I assume the current French leadership and the French generally are good people and will return our money," he said.

Putin also defended the decision to lift the ban on the delivery of Russian S-300 air defense missile system to Iran, saying that Iran should be rewarded for showing "a great degree of flexibility and a desire to reach compromise" on the nuclear program issue.

Putin repeated his claim that the missiles are purely defensive weapons. "This does not threaten Israel in any way," he said.

However, Israel has charged that the missile deal will embolden Iran to support extremist groups and further undermine stability in the Middle East.

Upbeat on economic prospects, despite decline

Russian President Vladimir Putin said the worst was over for Russian economy and reasserted an earlier prediction that the country could return to growth in near future.

"With what we are seeing now, the strengthening of the ruble and the growth in the markets ... I think that it may happen faster ... but somewhere in the region of two years," Putin said.

The Russian president also said that sanctions imposed amid the Ukraine conflict have encouraged Russia to diversify its production and move it to boost agricultural production and high-tech industries. Russia can overcome difficulties if it stays united, he said.

"We must use the current situation to reach new levels of development," Putin said during his annual call-in show, which received more than 2.3 million questions this year.

The Russian economy is expected to contract this year by between 3.5 percent and 4 percent, according to the central bank. Next year will also bring negative growth of over 1 percent, experts have forecast.

Since the West imposed sanctions on Russia over the Ukraine crisis and energy prices slumped, the Russian ruble has lost over 50 percent of its value against the dollar. However, the Russian currency rose more than 30 percent during recent weeks.

Putin downplayed the effect of sanctions on inflation, saying that the value of the ruble needed to be adjusted anyway.

"The ruble has stabilized and strengthened," Putin said. "We've corrected the rate of the national currency, nothing burst and everything is working."

Putin acknowledged that inflation and unemployment went up, but said "it wasn't like in the eurozone."

The euro has dropped to a historic low against the US dollar as a result of soaring inflation, the war in Ukraine and increased energy and food prices.