For years, US President Barack Obama has promised immigration policy reform. But critics complain nothing has happened. DW's Christian Roman met volunteers trying to help Mexicans survive their journey across the desert. 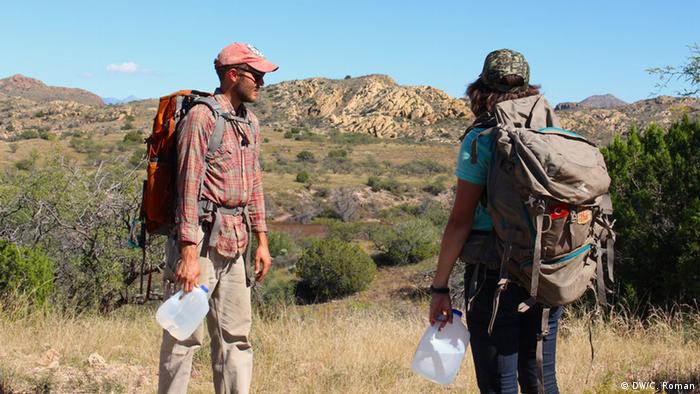 Somewhere on the border. For just short of an hour Dan Wilson has dragged himself and a rucksack full of supplies through the barren, scorching plain. His aim: a rocky shelter a few miles north of the Mexican border. Protected from the eyes of American border patrols, it's here that illegal border crossers from the south often find a final saving grace on their dangerous journey to the US - water and food, deposited by Wilson and other volunteers from the charity organization No More Deaths.

"Immigrants that make it this far have often been on the road for at least a week," he explains. According to Wilson, to keep the body alive during the exhausting trek through the desert, you need at least three liters of water a day. "Those who don't find our supplies, rarely make the last few kilometers to civilization." 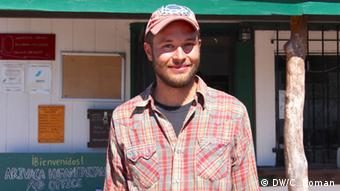 Wilson, of No More Deaths, helps provide supplies for immigrants

To immigrants from central and Latin America, the US seems like a paradise. In an attempt to flee poverty and crime, over a thousand illegal immigrants cross the US-Mexican border every day.

But for many, the barren land in-between is their final destination. Those caught by US border police must immediately return to Mexico. For others, the outcome is worse.

Last year, in southern Arizona alone, the non-governmental organization Missing Migrant Project counted 183 deaths, many of whom had died of thirst or starvation. A large number of bodies will be buried by the desert, never to be found again.

The organization No More Deaths has been fighting against the many fatalities in the border region for over 10 years. Funded by donations, some 150 volunteers have already built more than 80 water stations in Mexico and the US.

Wilson, who works as a full-time bike mechanic in the nearby town of Tucson, is today on his way through a refugee route across the Sonoran Desert in southern Arizona. Bathed in sweat, the 26-year-old reaches the supply depot at the foot of a canyon.

"The empty water canisters here show that someone needed our help," says Wilson, as he refills the four-liter tanks. Then with a thick felt-tip pen he writes, "AGUA PURA, por los viajeros" - fresh water for travelers. A shrine has been hewn into the rock by the efforts of illegal border crossers. Wooden crosses, rosaries and faded photos of those who didn't manage to make it to the US alive.

"These people come over here to give their families back home a better life," says Wilson. "These are not social parasites, illegal aliens and drug smugglers."

Millions who live in the shadows 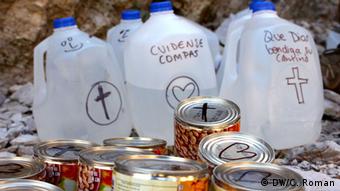 From the heart: a universal symbol understood by anyone who travels across the desert

In the US, however, the immigrants are treated as such. "We have a completely broken immigration system," criticizes Rodolfo Espino from Arizona State University in Phoenix. Eleven million illegal immigrants are assumed to be living in the US today - without papers, criminalized and in constant fear of being expelled.

Political scientists have criticized that instead of enabling immigrants to live in the US, after years of being promised an immigration reform, President Barack Obama has responded to the immigration problem on the US-Mexico border simply with more security measures. At the same time, Espino believes that "regardless of how high we make the border fence, the refugees will come with a bigger ladder." 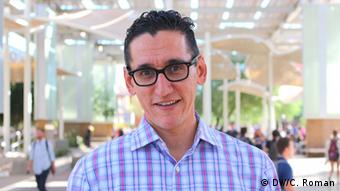 Espino: "We have a completely broken immigration system"

The border region with Mexico already resembles a military zone. Reinforced, meter-high, concrete walls, modern surveillance systems and more than 20,000 officials from the US border patrol try to control the 3,000-kilometer-long (1,864 miles) strip along the US border. In many places, armed citizen militias are also hunting down illegal immigrants. On several occasions, the activists have clashed with helpers from No More Deaths.

"Supporters of militias pierce our water cans and drive us away from the border area by force - they do everything they can to prevent refugees from coming through here," says Wilson, who has rarely encountered an immigrant in the desert himself. Today, too, he gets back in his dusty off-road vehicle without seeing a single refugee.

For the volunteers, this is a positive sign. "Someone will only try to make contact with people if they're in serious danger. All the others hide themselves far away from the roads to avoid border control and militias."

The fear of being caught is often much greater than that of dying alone in the desert. So tomorrow, hundreds of immigrants will once again make the perilous journey through the Sonoran wasteland. Some of them, however, will be saved by Wilson's supplies. 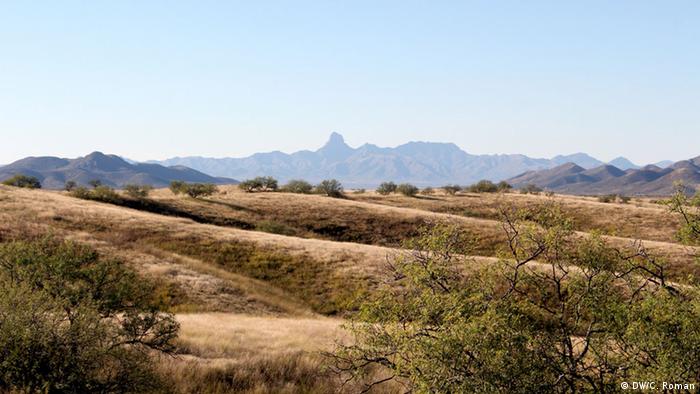 Last stop, the desert: Illegal immigration and its role in US midterm elections