China formally abolished its controversial "re-education through labor" camps last year. But the police are still allowed to detain people in other camps without a trial or the possibility to appeal. 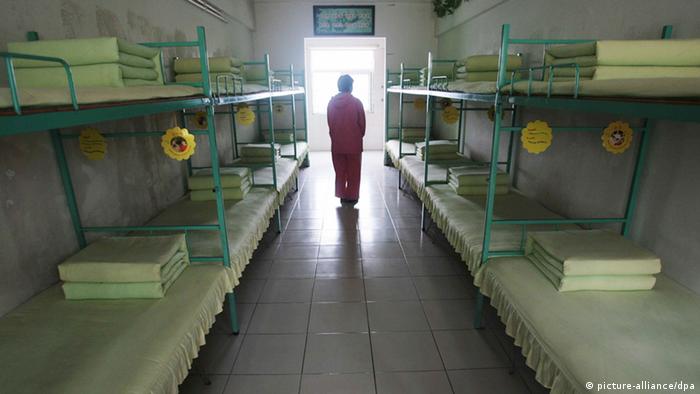 The Standing Committee of the National People's Congress confirmed in December 2013 what had already been decided by the Central Committee of the Communist Party of China (CPC) during its third plenary session in November: the immediate abolition of the so-called "re-education through labor" camps where the police were allowed to send minor offenders and other "undesired" people for up to four years - without access to a lawyer or the possibility to appeal.

Many analysts hailed the move as step towards a more just rule of law in China. However, people in China are still sent to labor camps without a trial. The reason for this is that the "re-education through labor" camps were just one part of China's prison camp system.

And other parts of the system are still in place. For instance, drug offenders - either drug users or small time dealers - get sent to so-called "drug rehabilitation centers." 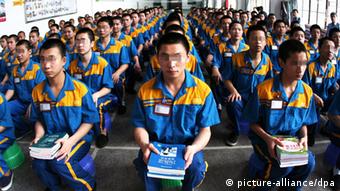 Inmates can be imprisoned for several years in Chinese camps

Nicholas Bequelin, Senior Asia Researcher at Human Rights Watch, puts the number of people detained in such camps at around 100,000. Bequelin told DW these centers are not very different from labor camps. "You just change the sign at the entrance of the camp and instead of being called labor camp it is called drug rehabilitation center," the expert said.

There is another set of camps designed for prostitutes and another one - though in smaller scale - for their customers. An estimated 20,000 people are currently imprisoned in camps euphemistically called "custody and education" centers. "There are no exact figures because the government doesn't release any," Shen Tingting, analyst at the US-based non-governmental organization Asia Catalyst, told DW. Shen co-authored a recently published study about the arbitrary detention of female sex workers in China.

The expert explains that police panels determine how long people are held in such centers, with sentences ranging from six months to two years. For the study, Asia Catalyst interviewed 30 sex workers in two Chinese cities, 24 of whom had already served time in the camps.

Harry Wu, an activist who spent 19 years in a Chinese prison labor camp, tells DW his personal experience there and why he thinks Beijing's indication of a reform of the system is not likely to change much. (15.01.2013)

China has admitted shortcomings at a UN Human Rights Council review in Geneva. Rights advocates continue to rebuke Beijing for arresting dissidents, suppressing ethnic minorities and widespread use of the death penalty. (22.10.2013)

'It's all for money'

The study found that - unlike what the camps' name suggests - prostitutes receive no education in the camps. On the contrary, unpaid forced labor is the rule of the day. As a result, none of the women surveyed gave up prostitution after their imprisonment. On top of that, says Shen Tingting, the women are forced to pay for their stay in the camp.

They are not only charged for board and lodging, but also for mandatory tests for HIV and other sexually transmitted diseases, the results of which are mostly kept secret from the women. This is why a sex worker named Yi is quoted in the Asia Catalyst report as saying: "I think it's all for money. Any talk of remolding or ideological education is bogus. It's just a way of extorting money in the name of the government and the law enforcement organs."

Human Rights Watch expert Bequelin says prostitution is pervasive in China. "The real policy is actually to let the sex trade proceed without much hindrance," he says, adding that there is no real intent from the state to stamp out sex work in China. However, he states, to keep up appearances there are regular sweeping "yellow campaigns" - yellow being the color for sex in China - that lead to hundreds of thousands of arrests.

Bequelin mentioned yet another system that allows the police to detain people without due process: the psychiatric hospital. Chinese police run its own psychiatric clinics which are independent from private clinics and those ran by the Ministry of Health. "They can put in there pretty much anyone they like if they have the approval of the psychiatric doctors, who are mostly made up of police doctors," said Bequelin. 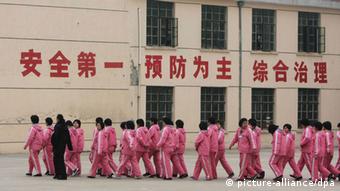 There are still prison camps for prostitutes in China

While a law was recently passed providing guarantees against involuntary commitment to psychiatric facilities, the reality is that if the police want to put someone behind the walls of a mental hospital, they can do it, Bequelin explained. "And they do it very frequently for short periods of time, sometimes a few weeks or a few months for petitioners."

Although Bequelin considers the abolition of the "re-education" camps as a step in the right direction, he points out that it will take a while until China abolishes long prison sentences passed without a trial and without access to lawyers or the possibility to appeal. The Human Rights Watch expert also states that even if the country achieved this, the question remains about how fairness of trials can be guaranteed in China in light of a judiciary which hinges on party guidelines.