No child will escape the impact of climate change: UNICEF 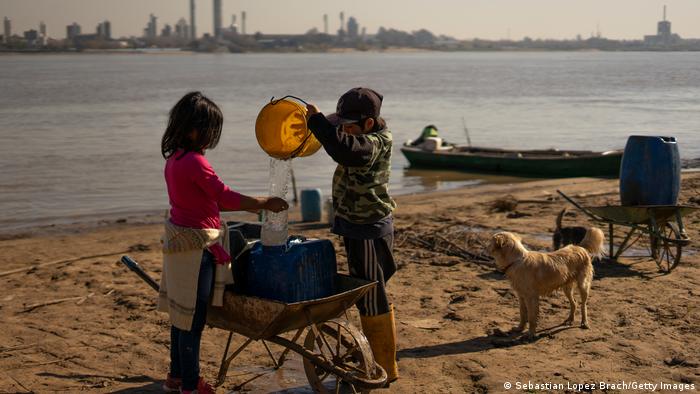 Children collecting water from a river in Rosario, Argentina

Close to one billion children were classified as "extremely high-risk" with the climate crisis threatening their health, education, and protection, exposing them to potentially fatal diseases, a new climate report from the UN's children's agency.

"For the first time, we have a complete picture of where and how children are vulnerable to climate change, and that picture is almost unimaginably dire," said Henrietta Fore, UNICEF executive director.

"Climate and environmental shocks are undermining the complete spectrum of children's rights, from access to clean air, food and safe water; to education, housing, freedom from exploitation, and even their right to survive. Virtually no child's life will be unaffected," she added.

Titled "The Climate Crisis Is a Child Rights Crisis", the UNICEF report found that nearly half of the world's 2.2 billion children living in 33 countries were "extremely high-risk." These include several African nations, such as the Central African Republic, Chad, Nigeria, Guinea. India and the Philippines were also classified in the same manner.

They "face a deadly combination of exposure to multiple climate and environmental shocks with a high vulnerability due to inadequate essential services, such as water and sanitation, healthcare and education," the report found.

While the findings showcased the number of children impacted today, it said the figures were likely to get worse as the impacts of climate change accelerated.

Climate activist Greta Thunberg said that the latest report confirmed that children will be impacted inordinately, urging world leaders to take action instead of just talking when they meet in Glasgow for this year's United Nations Climate Change Conference (COP26).

"I don't expect them to do that, but I would be more than happy if they could prove me wrong," said Thunberg, 18, as the index was published on the third anniversary of Fridays For Future.

The global youth movement began with Thunberg's solo protest outside her school in Sweden.

She was joined by young activists around the world. Philippines' Mitzi Jonelle Tan, 23, shared experiences of doing homework by candlelight with typhoons raging outside or facing the fear of drowning in her bed as floodwaters entered her room.

World leaders' "empty promises and vague plans" were not enough, Tan said. "There's no excuse for this COP... to not be the one that changes things."