Hundreds of youths gathered in Nigeria’s capital to call on President Buhari to sign an Age Reduction Bill into law. DW’s Katrin Gänsler met the organizers of the #NotTooYoungToRun initiative. 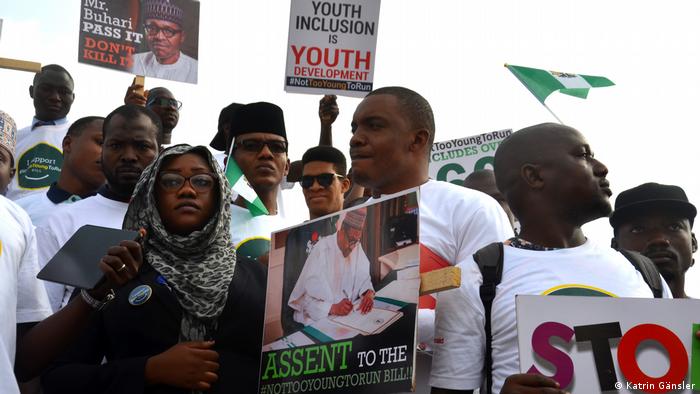 "Not too young to run! Ready to run!" the protesters sing to the shakers and drum beats. More than 300 young Nigerians gathered at Unity Fountain in the center of the Nigerian capital, Abuja, to make their way to the presidential palace. Their white t-shirts with logos and their placards carries a clear message: We are not too young to run for political office.

The #NotTooYoungToRun initiative by the 50 plus youth organizations from all over the country has been quite successful. Nigeria's present law says that only people over the age of 40 can run for the presidency, while the office of governors or senators can be held from the age of 35. The new Age Reduction Bill has lowered the age limit to 35 and 30 respectively. Nigeria's lower and upper house of parliament, the Senate and House of Representatives, already passed the bill in July 2017. But President Buhari hasn't signed it into law.

"The idea is to open up space and have more young people run for office," says Cynthia Mbamalu, who works for the Youth Initiative for Advocacy Growth and Advancement (YIAGA). She is one of the organizers of the #NotTooYoungToRun movement. Nigeria's politicians rarely address the concerns of the youth initiatives such as the demand for better education and job opportunities, says Mbamalu. "What inclusion does is to promote electoral competition in such a way that citizens, voters have better options, right?" The same state authorities were in power when my mother was in high school, says Cynthia Mbamalu

Young people are the majority

In terms of demographics, the young people have the numbers on their side. More than 62 percent of Nigerians are below the age of 25. On the other hand, most of Nigeria's politicians are above the age of 50 and have held political positions for decades. The current president, Muhammadu Buhari, is 75 years old. He missed several months of political activity in 2017 due to illness and is likely to stand for re-election in next year's presidential elections.

"My mom told me that when she was in high school the current governor of the state was the military governor of state," says Mbamalu. "So you can imagine. You have the same people in government." 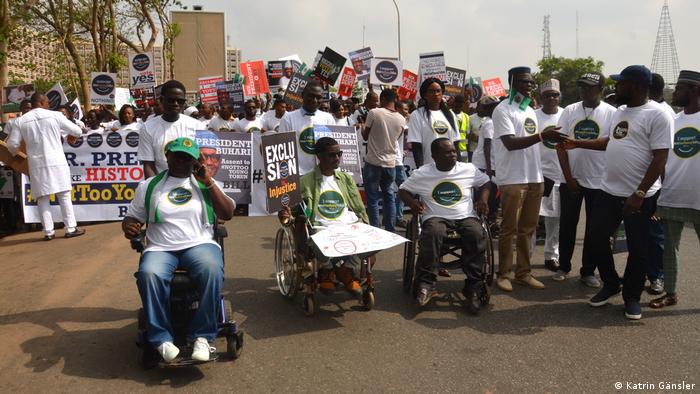 The protest goes beyond party affiliation. The young people simply want a chance to be included

#NotTooYoungToRun is a recommendation and parties, of course, don't have to nominate younger people. The bill even has the backing amongst members of the ruling All Progressives Congress (APC). "The party has come quite far," says the APC's Rinsola Abiola. "They have included young people in different organs like the board of trustees where I am a member and the committees. They try to include young people. But we need better representation and that's what this bill works towards."

While the youth groups waved their placards outside the presidential villa, Buhari himself was not at home. Mbamalu, however still hopes to make a change in Nigeria.

#The77percent - a platform for Africa's majority

The 77 Percent: Staying connected in Nigeria