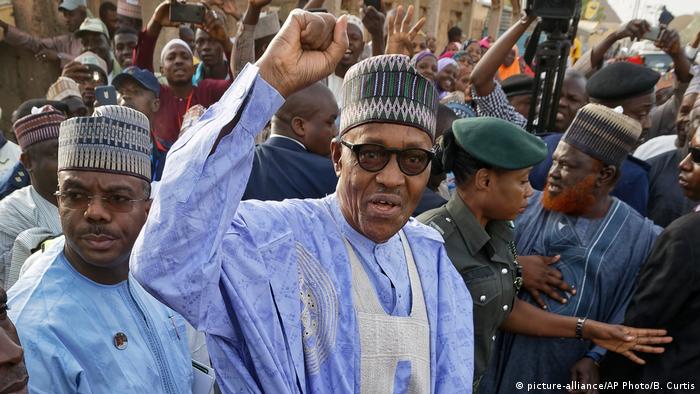 Nigerian President Muhammadu Buhari has secured a second term as the leader of Africa's most populous country, the electoral commission said Wednesday, after a delayed election and opposition claims the vote was rigged.

To win, a candidate needed a simple majority of votes nationwide and at least 25 percent support in two-thirds of Nigeria's 36 states and the capital territory.

Supporters of Buhari's All Progressives Congress (APC) celebrated the victory in the capital, Abuja.

How free and fair was Nigeria's election?

On Tuesday, the PDP demanded a halt to vote counting from Saturday's election, citing electoral fraud.

Tanimu Turaki, a spokesman for the PDP, said handheld electronic machines that check biometric voter identity cards had been tampered with, leading him to call for an "immediate halt to the ongoing collation of results."

"The PDP predicates this demand on available evidence to the effect that data from the card readers are being reconfigured to suit the manipulations" of the ruling party, he said.

He also said there was "credible information" that the election in neighboring Borno state was a "figure-writing exercise" done according to the "whims and caprices" of the APC.

Buhari's party has accused the opposition of manipulating the results and demanded they provide evidence of election fraud.

Saturday's vote was marked by delays, logistical problems and violence, casting a shadow over the credibility of the results.

The Economic Community of West African States, the African Union and the United Nations have urged all sides to await official results before filing electoral complaints. It is unclear if Abubakar will challenge the results.

Voting under the threat of Boko Haram

Voters in northeastern Nigeria are eager to cast their ballots in Saturday’s crucial election. But the security challenges caused by Boko Haram are immense as DW's Thomas Mösch reports from Maiduguri. (14.02.2019)

At least 66 bodies have been found in eight villages in Kaduna state, where religious tensions have led to clashes. The state governor urged calm ahead of Nigeria's hotly contested national elections. (15.02.2019)