As many as 39 people have been killed following Saturday's presidential election, civil society groups have said. Electoral authorities are expected to announce the winner of the vote on Monday. 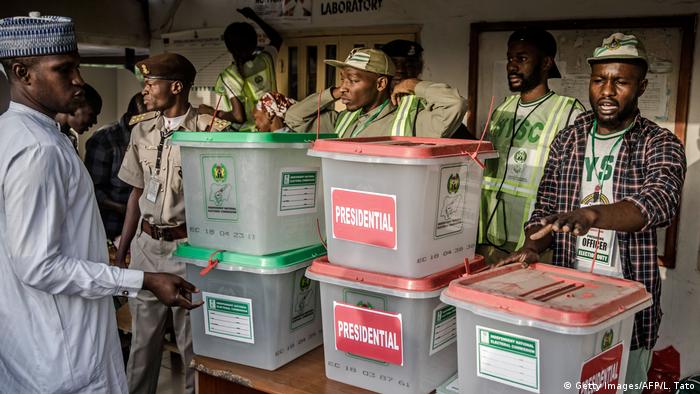 Unrest and uncertainty has gripped Nigeria after a second day of vote counting following the presidential election. Human rights groups have reported the deaths of 39 people, while Nigerian police have confirmed some 128 arrests following election-related violence.

Saturday's presidential election was fraught with difficulty, having been delayed a week by the electoral commission at the last minute, citing logistical challenges.

President Muhammadu Buhari, 76, a former military ruler, is seeking a second term and has been challenged by Atiku Abubakar, 72, a businessman and former vice president.

Official results are expected as early as Monday, though some voting took place on Sunday in scattered areas. Both Buhari and Abubakar have claimed victory in the vote.

Nigerians line up to vote

Authorities have not confirmed the figures, but were bracing for the possibility of continued unrest once results are announced this week.

The worst incidence of violence took place in the town of Abonnema, in Rivers State, some 14 kilometers (9 miles) west of the main oil industry city of Port Harcourt, the Situation Room said.

Seven people died there in a shootout between an unidentified gang and Nigerian soldiers, army sources said. The firefight began when attackers barricaded a major road into the town and ambushed the troops, Nigeria's army said.

Additionally, authorities said they found a "cache of explosives" that included 38 "assorted weapons." Police did not release further details on the arms seizure.

Nigeria is Africa's most populous country and the continent's largest economy. Some 72 million people were eligible to vote on Saturday.

The Situation Room were critical in their assessment of the elections, calling it a step back from Nigeria's most transparent and efficient election in 2015.

However, the African Union observer mission said Monday that the elections "overall political climate remained largely peaceful and conducive for the conducting of credible elections."

"The 2019 elections took place in a generally peaceful environment," said Hailemariam Desalegn, head of the AU observer mission. The union did, however, criticize poor preparation and called for calm until the final results.

As the dust settles on Nigeria's postponed general election, Nigerians have expressed their frustration with the electoral commission. But many are still optimistic their voices will be heard. (18.02.2019)

Ports in Africa lose vast sums of money because of corrupt port officials, inefficiencies, and poor infrastructure, among others. Corruption has affected economic growth and slowed the clearance and forwarding of goods.