At least 60 people are believed to have been killed in twin attacks in Borno state. Armed militants also attacked a UN humanitarian hub with rocket launchers, reportedly accusing them of being "non-believers." 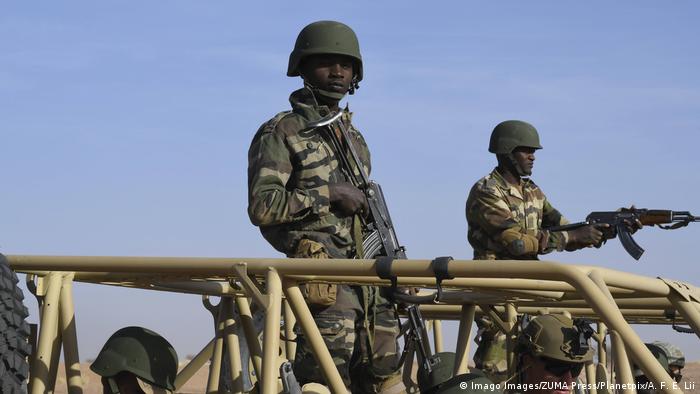 Inhabitants of remote Goni Usmanti village told French news agency AFP  that jihadists linked to IS shot 38 people in a raid on Saturday and set a truck ablaze killing an unknown number of passengers.

Dozens of militants clashed with soldiers and members of a government-backed militia in Monguno near Lake Chad and in Nganzai, just days after militants killed at least 69 people in a village raid in Gubio. ISWAP claimed the two Saturday attacks, and the Gubio attack.

Militants armed with heavy weaponry and rocket launchers arrived in the humanitarian organization's hub of Monguno on Saturday, clashing with government forces and killing at least 20 soldiers.

"They fired rocket-propelled grenades indiscriminately which fell on homes, killing three people and injuring many others," resident Kulo Gana told French news agency AFP. "I saw the bodies of the two soldiers and the militia member on the streets after the fighting."

The Nigerian military wrote on Twitter Sunday that the army and air force had "successfully repelled" the attack on Monguno and killed 20 jihadists.

According to humanitarian workers and local residents in the area, hundreds of civilians were injured in the crossfire. The local hospital reportedly became overwhelmed with the number of victims, forcing some of the injured to lay outside the clinic awaiting help.

Local sources told Reuters news agency that the militants also set fire to the local police station and burned down the United Nations' humanitarian facility in the area, although a UN spokesperson said the establishment sustained only light damage.

According to Reuters, militants distributed letters to residents, warning them not to work with the military, white Christian westerners or other "non-believers."

Militants also raided Nganzai at about the same time on Saturday, according to two residents and one Civilian Joint Task Force (CJTF) fighter. They arrived on motorcycles and pickup trucks and killed more than 40 residents, the sources said.

In the region's 10-year-long conflict, ISWAP and rival jihadist group Boko Haram have killed 36,000 people and displaced around two million from their homes, according to the UN.

The conflict has spilled over into neighboring Niger, Chad and Cameroon, prompting a regional military coalition to fight the militants.

At least 60 people have been killed in a series of attacks on villages by armed gangs. Experts warned division in the region could give rise to jihadist groups as bloody violence continues to cause havoc. (28.05.2020)

Boko Haram has launched its deadliest assault yet against troops in Chad. In a separate attack, the militant group killed at least 50 Nigerian soldiers in an ambush in eastern Borno state. (25.03.2020)

Widespread failings in Nigeria's security sector are causing frustrations to boil over in the conflict-ridden north. While reform may be on the horizon, implementation will likely prove to be a major challenge.  (12.02.2020)

Ten years ago, the radical Boko Haram sect became a terror organisation and embarked on a trail of murder and mayhem that continues today. The Nigerian government has learnt little from past mistakes, says Thomas Mösch. (01.08.2019)

Abused students at an Islamic school in Nigeria have "revolted," with most of them managing to escape, officials have said. Police found dozens more in chains. The latest raid comes just weeks after a similar rescue. (15.10.2019)

The death toll stands at 81 after suspected members of the extremist group Boko Haram carried out an attack in Borno state. Thousands have been killed in the region by Islamist insurgents over the last decade. (10.06.2020)

Earlier this week, the Islamist militant group said they were responsible for the raid at a school in Katsina state that took place on December 11. Boko Haram have now issued a video in an effort to back up those claims.

An armed gang has stormed a secondary school in northern Nigeria, prompting a shootout with the country's military and police. Search and rescue operations are underway to find the scores of missing students.