New Zealand plans to create a gun register and tighten gun licensing, among other measures. Prime Minister Jacinda Ardern said the intent of the reform was to "stop weapons falling into the wrong hands." 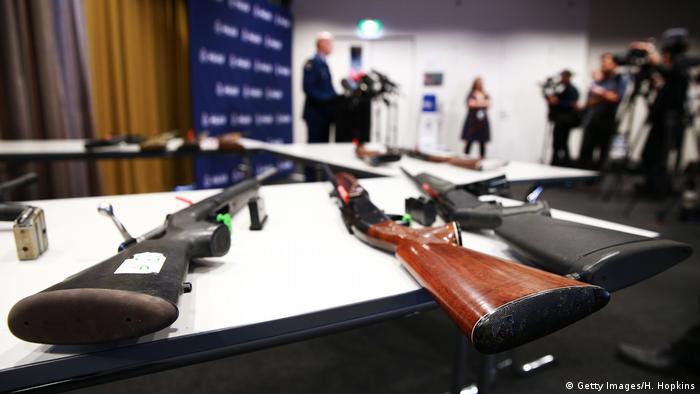 New Zealand's government said on Monday that it wanted to implement sweeping gun law reform, in the second measure to tighten firearm rules following a mass shooting at two mosques in Christchurch in March.

Prime Minister Jacinda Ardern said the law would aim to create a national gun and license holder register, ban visitors from buying guns and tighten rules on obtaining and maintaining a firearms license.

Other planks of the reform would establish new licensing for around 260 shooting clubs and ranges, expand police powers to confiscate weapons if an individual shows warning signs, and require a license to purchase ammunition.

Under the law, firearms licenses would have to be renewed every five years instead of 10.

"The terror attack on March 15 highlighted the flaws in our licensing system," Ardern said. "The changes announced today have been decades in the making. It is now up to this parliament to deliver in the interests of public and personal safety."

The reform would also establish that owning a firearm is a privilege that requires safety, not a right.

Police have long advocated for a national gun register and stricter gun laws.

"Under the current law, we do not know exactly how many guns are in circulation, who owns them, who is selling them, who is buying them, or how securely they are stored against the risk of theft or misuse," Police Minister Stuart Nash said. "Police have very few options for intervening when they see concerning behavior. Revoking a firearms license can only happen for the most serious cases and can take weeks, during which time the guns can be given away or disappear without trace."

A firearm buy-back scheme was also implemented. Gun owners have until December 20 to hand in an estimated 13,000 assault rifles and military style semi-automatics.

Around 250,000 New Zealanders out of a population of almost 4.8 million hold a firearms license. It is estimated there are around 1.5 million firearms in a country with many farms, 98% of which are shotguns and rifles.

Details of the new law are still being worked out and will need to be passed by parliament.

Social media giants, including Facebook and Twitter, were heavily criticized after the terror attacks on New Zealand mosques for their perceived inactivity in dealing with material livestreamed by the suspect. (30.03.2019)

Opinion: Jacinda Ardern is getting things right in New Zealand

The New Zealand government is banning the sale and possession of assault rifles and semi-automatic weapons. In doing so, it is again taking swift and effective action that sends a powerful signal, says DW's Martin Muno. (21.03.2019)

The man accused of gunning down 51 people at two mosques in Christchurch has been formally charged with terrorism. The charge is a first for New Zealand and carries a maximum penalty of life in prison. (21.05.2019)