A new report criticizes German authorities of downplaying right-wing violence. The report claims little has been done in the wake of the murders by the underground group NSU. 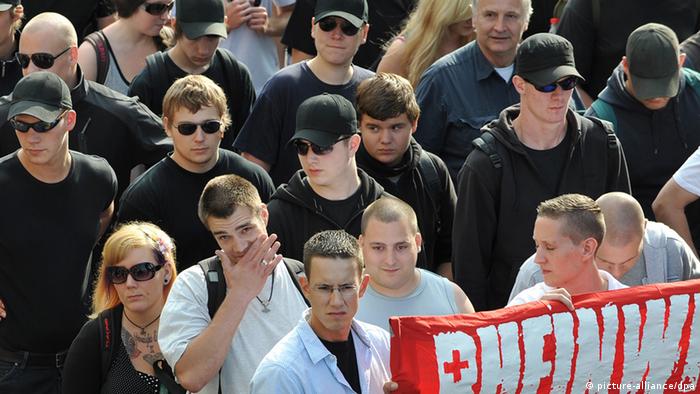 The Amadeu Antonio Foundation has accused German authorities of trivializing right-wing extremism. The foundation was critical, saying despite murders by the Nazi underground (NSU) discovered last year, attitudes had not changed.

Political scientist Marion Kraske authored the report on behalf of the foundation.

"Police and law enforcement authorities deny all too often the political motives of racism. In many cities there is a culture of ignorance. The victims are left alone in their distress, the perpetrators, however, experience solidarity and can therefore occupy more and more social space," she said.

Focusing on civil society initiatives in eight states across Germany, the report shows how in some regions, a "culture of looking away," has already established a right wing everyday culture. It further suggests that for years, the violence of extreme right groups has been played down by authorities.

"The dangerousness of the offender is denied, and hidden racism becomes the motive for right-wing extremist crimes," wrote Kraske.

Foundation chairperson Anetta Kahane, said the NSU deeds are, "just the tip of the iceberg of right-wing violence." She added that many places in Germany are a "no-go area" for people with non-white skin color.

Kahane called for political action: "It is absurd, that all the criticism is focused on the Federal interior minister, but the person responsible for prevention, Youth Minister Kristina Schröder, has her hands in her lap."

Founded in 1998, the Amadeu Antonio Foundation supports initiatives that fight against racism and anti-Semitism. The foundation is named after an Angolan worker who in 1990 was killed by members of the radical right. He was the first victim of racial violence that followed the fall of the Berlin Wall.