New poll puts Merkel, CDU back up as election nears

A monthly survey finds Germans mildly satisfied ahead of September's Bundestag vote. After a couple of months trailing Martin Schulz as the choice chancellor candidate, incumbent Angela Merkel is on top all over again. 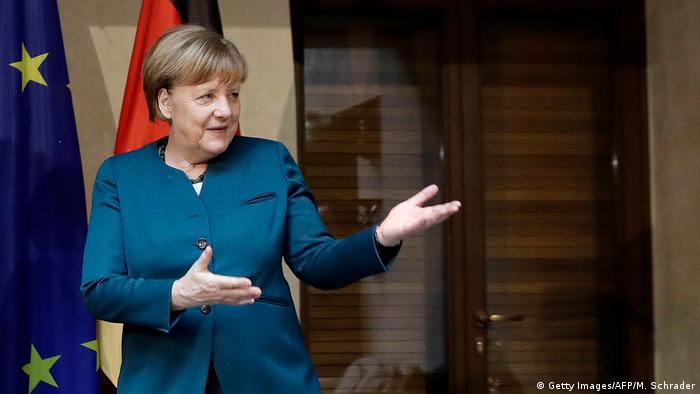 Angela Merkel and her conservative Christian Democrats (CDU) were the bigger winners in the public broadcaster ARD's monthly game of "Whom Would You Rather?" For the first time since the December DeutschlandTrend survey was released, the German chancellor led her main challenger, Martin Schulz,  in a hypothetical head-to-head matchup.

Schulz, the candidate for the CDU's junior coalition partners, the center-left Social Democrats (SPD), had pulled even with Merkel by January's poll and in February opened a 16-point (50 percent to 34 percent) lead over the chancellor. That dipped to 45 percent to 36 percent by March, but Merkel, the devil Germans know best, gained 10 points in the most recent DeutschlandTrend survey, giving her 46 percent hypothetical support. A former bookseller from the western city of Aachen who has spent most of his political career in the European Parliament, including five years as its president, Schulz dropped six points in the most recent survey, leaving him at 40 percent. 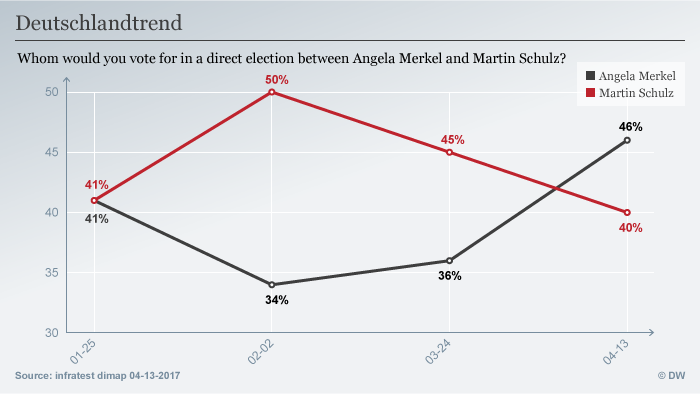 Surveying 1,002 Germans, the pollster Infratest dimap found that Schulz had lost four points when it came to overall satisfaction, leaving him at just 48 percent, with Merkel up two points, to 62 percent. Germans are most satisfied with Finance Minister Wolfgang Schäuble, who was up three points, to 68 percent. Respondents indicated satisfaction with the job performance of Vice Chancellor and Foreign Minister Sigmar Gabriel (56 percent), Interior Minister Thomas de Maiziere (55 percent) and Defense Minister Ursula von der Leyen (54 percent). The country's least satisfying politician is Frauke Petry, the de facto leader of the anti-immigrant Alternative for Germany (AfD), who received just 9 percent support - down a point from March.

Merkel's CDU and its Bavarian partner, the Christian Social Union, also lead ahead of September's Bundestag elections, with the right-wing bloc up two points, to 34 percent support, while the SPD held even at 31 percent. Also steady were the AfD, with 11 percent support, the Greens (8 percent) and Germany's laissez-faire Free Democrats (FDP), with 6 percent. The Left lost a point and now has 7 percent support. 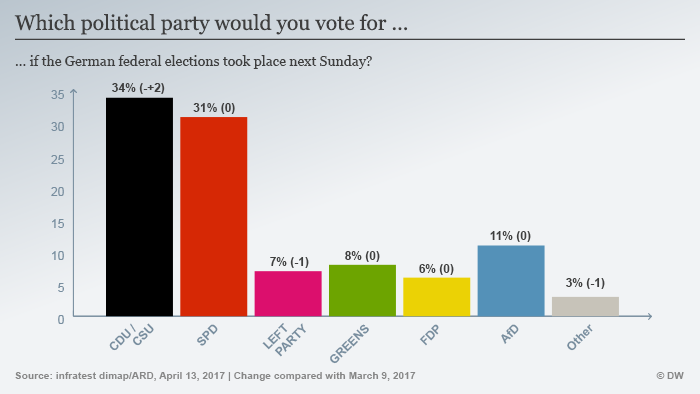 DeutschlandTrend found Germans relatively OK with things the way they are, with 51 percent indicating that they were satisfied with the government they've got, up nine points from March, and another 2 percent saying they were very satisfied. Thirty-four percent of respondents said they weren't so satisfied, however - down nine points from March - and 13 percent said they weren't satisfied at all. By party, that broke down to broad satisfaction for CDU supporters (73 percent), enthusiastic satisfaction for Greens (60 percent) and resigned satisfaction for SPD members (51 percent). AfD supporters were the least satisfied people in Germany, with 98 percent responding negatively to the notion.

According to the poll, 51 percent of Germans would like to renew the current grand coalition with the CDU in charge after September's elections. Forty-seven percent would rather see the SPD lead the coalition, 37 percent would like the Greens to team up with the CDU and leave the SPD out, and 36 percent wouldn't mind retrying the CDU-FDP coalition of 2009-13. The idea of a social-environmental coalition of the SPD, Left and Greens lost seven points and now has just 26 percent support, with 72 percent of Germans saying that would be a not-so-good or even bad idea.

Confined only by DeutschlandTrend's limited multiple-choice responses, Germans offered up the broadest possible range of opinions when asked specific questions about events in the news. Domestically, following a bomb attack on a football team's bus in the Ruhrgebiet city of Dortmund, 56 percent of Germans agreed that "all in all our land is well-protected against terrorist attacks." Only 42 percent said they were especially vigilant in the presence of, undefined but perhaps implied, "suspicious looking people and items." Eighty-two percent said they feel "all in all" safe in Germany.

Without breaking down respondents' ethnicity, DeutschlandTrend found that 60 percent consider "German-Turkish coexistence" in the country good or very good; 36 percent - again without nuance - responded that relations were bad or very bad. Seventy-nine percent of Greens said the coexistence was good or very good, followed by members of the CDU (65 percent), Left (64 percent), SPD (63 percent) and FDP (58 percent). The only party adherents to respond overwhelmingly negatively to the question were the AfD's, with 28 percent saying relations were good and 69 percent calling the coexistence bad or very bad.

Respondents consider Turkey's government Germany's least reliable international partner: Just 3 percent - down a point - said Recep Tayyip Erdogan's regime could be trusted, and 95 percent said the opposite. Donald Trump's United States was thought to be trustworthy by 29 percent of respondents, up seven points from March, and Vladimir Putin's Russia lost a point, with 20 percent of respondents considering the Kremlin reliable. The most reliable partners represent Germany's longest-lasting postwar alliances, with France thought to be trustworthy by 91 percent of respondents and even Brexiting Britain considered honest enough by 57 percent, though that was down five points from November. 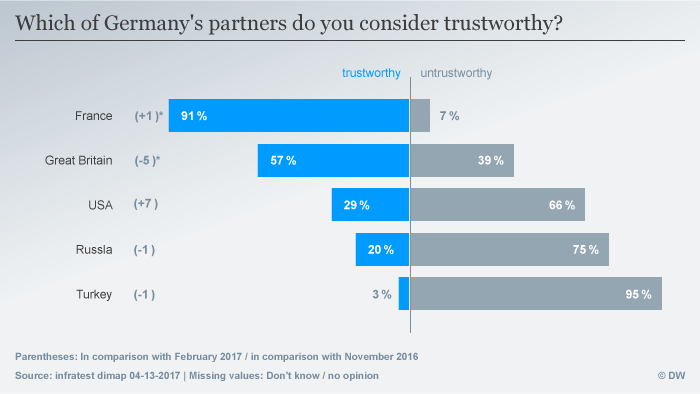 Seventy-two percent worry that Syria's civil war could engulf the Middle East, and 67 percent expressed concern that the recent US airstrikes on a regime-controlled military base could escalate the Americans' conflict with Russia. Only 44 percent appreciate the expanded US involvement in the conflict following recent chemical attacks on civilians, with 50 percent responding in the negative. Fifty-nine percent were pessimistic that the US and Russia could work together to help bring an end to the six-year war.