New leaders in Greece, Italy call for united front to combat debt crisis | Europe | News and current affairs from around the continent | DW | 15.11.2011

Respected economic experts have stepped into the political vacuum created by the collapse of partisan governments in Athens and Rome, raising the hopes that they can build a broad coalition to combat the debt crisis. 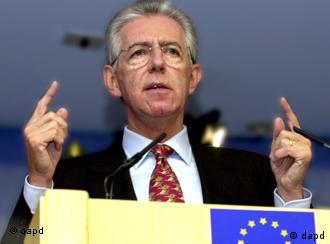 Monti opposes a timetable for his government

Non-partisan technocrats slated to take the reigns of power in Greece and Italy are seeking to consolidate their political support ahead of upcoming parliamentary confidence votes, while opposition continues to simmer in Athens and Rome over austerity measures aimed at reducing national debts and stabilizing the eurozone.

Mario Monti, nominated by Italian President Giorgio Napolitano to succeed Silvio Berlusconi as prime minister, said it was "premature" to discuss whether or not Italy would have to adopt further austerity measures to dig itself out from under 1.9 trillion euros ($ 2.6 trillion) of sovereign debt.

"Blood no, tears no, but maybe sacrifices," said Monti, an economist and former EU official famous for pursuing trust-busting cases against Microsoft and General Electric during his tenure as Europe's commissioner for competition.

Several members of Berlusconi's conservative PDL party have said that Monti should only stay in power long enough to implement economic reforms. Monti, however, opposes any timeline imposed by parliament that would force his prospective government to dissolve before the 2013 national elections.

"If a date before (2013) is set, this haste would take away credibility from the government's actions," Monti said.

Monti, who is currently seeking support among Italy's political parties, has not announced a deadline for the formation of a cabinet. President Napolitano said he hoped a new government would be approved by a vote of confidence this week. 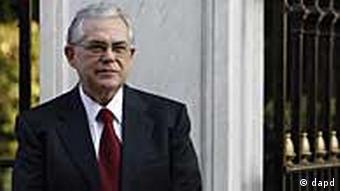 Papademos has to convince parliament to approve unpopular austerity measures

Meanwhile, Greek Prime Minister Lucas Papademos called on members of his national unity coalition - made up of socialists, conservatives and nationalists - to sign a written pledge to implement the austerity measures demanded by Brussels in exchange for the latest rescue package.

But Antonis Samaras, leader of the conservative New Democracy party, has refused to sign the pledge, saying that he "agrees with the goals to cut government spending" but opposes "whatever stunts growth."

Papademos, former vice president of the European Central Bank (ECB), came to power after former Greek prime minister George Papandreou resigned in the aftermath of an aborted call for a referendum on the latest EU rescue package. Papademos is scheduled to face a vote of confidence on Wednesday.

The so-called troika - the ECB, EU Commission, and International Monetary Fund (IMF) - are expected to visit Athens on Friday to assess whether or not Greece has met the conditions for the next tranche of 8 billion euros in bailout out money, which has been frozen since August. Greece currently has enough reserves to last until December 15.

Greece's new prime minister, Lucas Papademos, is at a crucial crossroads. He needs to pull the country back from the brink of bankruptcy and convince creditors that tough reforms will be implemented. (11.11.2011)